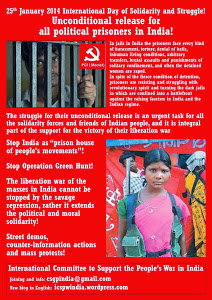 In India more than 10.000 supposed Maoists are languishing in jails, to them are to be added other thousands of prisoners involved in the national liberation movements (Kashmir, Manipur, etc.) or other democratic movements.
Beside with the leaders, cadres and members of the PLGA, more than the 90% of that number are Adivasi villagers who resisted the forced evacuation; peasants who struggled against the MOUs signed by governments and TNCs to exploit the people and continue the imperialist looting of natural resources; activists of the national minorities organized against the rising threat of Hindu communal fascism; students, intellectuals, artists belonging the RDF and other democratic organizations, guilty of standing on the side of the people facing the war on them waged by the Indian state; people's women,feminists united to rebel against the huge escalation of rapes, committed in part by the armed and police forces and paramilaty fascist squads sponsored by the State, as weapon of the war on people.
In jails the prisoners face every kind of harassment, torture, denial of bails, inhumane living conditions, arbitrary transfers, brutal assaults and punishments of solitary confinement, and often the detained women are raped.
In spite of the fierce condition of detention, prisoners are resisting and struggling with revolutionary spirit and turning the dark jails in which are confined into a battlefront against the raising fascism in India and the Indian regime.
The struggle for their unconditioned release is an urgent task for all the solidarity forces and friends of Indian people, and it is integrant part of the support for the victory of their liberation war.

But all India is more and more turned by the ruling classes into a “prison house of  people's movements”.
Since mid-2009, the Indian ruling classes, under the guidance and with the assistance of imperialists, launched the multi-pronged and country-wide offensive called Operation Green Hunt – a war on people to wipe out the Maoist movement and suppress the genuine struggles of the people.
While repression on oppressed masses is the hallmark of any exploiting state and always has been a feature of the Indian State, the Operation Green has surpassed all the previous offensives both in its scale and brutality.
Thousands of revolutionary and democratic mass organizations leaders and members have been assassinated, tortured and put in jails. Blamed under false cases, many of them are facing harsh punishments.
Massacres, gang rapes, looting and destruction of villages by armed forces have become the order of the day.
The Operation Green Hunt – War on People – is supposed aimed to wipe out the Maoist movement but it is in fact it targets and is aimed to suppress any genuine democratic demand of the people, by framing them in cases linked with the CPI (Maoist) according the draconian laws adopted by the central and state governments, that brand people's leaders and strugglers as 'anti-national or terrorists'.
Stop the Operation Green Hunt, stop the War on People !

But the liberation war of the masses in India cannot be stopped by the savage repression, rather it extends the political and moral solidarity to the liberation war.
Many international initiatives and efforts built solidarity with people in India and supported their struggle for liberation, including the great International Conference of Hamburg and the International Days of Actions organized by the International Committee of Support. These initiatives had impact throughout the world and in India itself, dealt blows to imperialism and the Indian regime, that today reacts urging the governments, first those of EU, to stop the initiatives of solidarity.
It is for this reason that today more than ever it is necessary to further consolidate and extend the solidarity.
Therefore we call to a large International Day of Solidarity and struggle for the unconditioned release of the political prisoners in India on 25th of January 2014, to be held everywhere is possible in the world, in all the possible ways decided by the committees and solidarity forces at national level, with street actions, that call the masses to participate, and counter-information actions and protests towards embassies, consulates, offices of the international press and humanitarian organizations etc., to be held during the week before the International Day.

International Committee to Support the People’s War in India
5 december 2014
Joining and info:
csgpindia@gmail.com
new blog in english
icspwindia.wordpress.com
Posted by nickglais on 12/10/2013 05:58:00 AM