Why is there a law that can imprison someone for life for simply wanting to imagine that the UK was a republic? Sign Petition to Repeal the Treason Felony Act of 1848 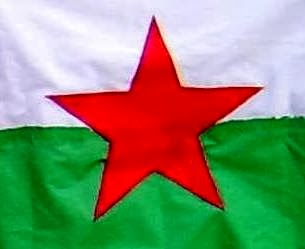 In full, section three of the Treason Felony Act 1848 reads:

If any person whatsoever shall, within the United Kingdom or without, compass, imagine, invent, devise, or intend to deprive or depose our Most Gracious Lady the Queen, from the style, honour, or royal name of the imperial crown of the United Kingdom, or of any other of her Majesty's dominions and countries, or to levy war against her Majesty, within any part of the United Kingdom, in order by force or constraint to compel her to change her measures or counsels, or in order to put any force or constraint upon or in order to intimidate or overawe both Houses or either House of Parliament, or to move or stir any foreigner or stranger with force to invade the United Kingdom or any other of her Majesty's dominions or countries under the obeisance of her Majesty, and such compassings, imaginations, inventions, devices, or intentions, or any of them, shall express, utter, or declare, by publishing any printing or writing ... or by any overt act or deed, every person so offending shall be guilty of felony, and being convicted thereof shall be liable ... to be transported beyond the seas for the term of his or her natural life

The government has confirmed that republicanism is still punishable by life imprisonment and that it remains illegal to even 'imagine' overthrowing the Queen.


The revelation comes as the Ministry of Justice embarrassingly admitted that a law threatening to jail for life anyone who has called for the abolition of the monarchy had been mistakenly included on a list of 309 offences due to be repealed before May.
Although the law has not been used to prosecute anyone since 1879, it means that it is still theoretically possible to imprison for life anybody who even so much as "imagines" overthrowing the Crown or waging war against the Queen.

SIGN PETITION TO  ABOLISH THE TREASON FELONY ACT OF 1848 HERE

Responsible department: Office of the Leader of the House of Commons
We, the undersigned, call on the government to repeal the Treason Felony Act 1848 as it goes against everything this country stands for. "If any person whatsoever shall, within the United Kingdom or without, compass, imagine, invent, devise, or intend to deprive or depose our Most Gracious Lady the Queen, from the style, honour, or royal name of the imperial crown of the United Kingdom, or of any other of her Majesty’s dominions and countries,"

"imagine" Why is there a law that can imprison someone for life for simply wanting to imagine that the UK was a republic? If this is the case then there are thousands of people all over the world guilty!

The UK says it stands for democracy but how can we call our self a democracy when you can't even have an imagination with out risking a lifetime in prison?

This law also clearly violates article 19 of The Universal Declaration of Human Rights which the UK voted in favour of and adopted in 1948.

A 165-year-old law that threatens anyone calling for the abolition of the monarchy with life imprisonment is technically still in force – after the Ministry of Justice admitted wrongly announcing that it had been repealed.

The Treason Felony Act 1848 has been the subject of repeated legal confusion this century.

It was the subject of a high court challenge by the Guardian in 2003. This week, in a footnote to a list of new offences, the Ministry of Justice said the powers in section 3 of the Act had finally been swept away in a belated, legislative pruning of unwanted laws.

The act – which makes it a criminal offence, punishable by life imprisonment, to advocate abolition of the monarchy in print, even by peaceful means – has not been deployed in a prosecution since 1879.

The Ministry of Justice said: "Section 3 of the Treason Felony Act 1848 has not been repealed.

The Ministry of Justice has removed this publication and is reviewing its contents."


GET THIS LAW AGAINST DEMOCRACY OFF THE STATUE BOOKS