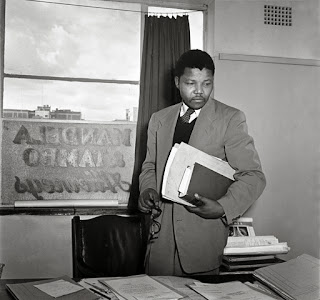 "In the life of every nation, there arise men who leave an indelible and eternal stamp on the history of their peoples; men who are both products and makers of history. And when they pass they leave a vision of a new and better life and the tools with which to win and build it."

With deep sorrow and a profound sense of loss, the African National Congress received the sad news of the passing of our Isithwalandwe and former President, Comrade Nelson Rolihlahla Mandela.

Our nation has lost a colossus, an epitome of humility, equality, justice, peace and the hope of millions; here and abroad.

Madiba loved South Africa. We recall the strength of his fist punching the air as he stepped out of prison after 27 years; and his sternness during the negotiations for the freedom of our beloved country. We celebrate his ever-present smile, the cheerful Madiba jive, his love for children and great respect for the women of this country.

The large African Boabab, who loved Africa as much as he loved South Africa, has fallen. Its trunk and seeds will nourish the earth for decades to come.

Nelson Mandela, Isithwalandwe – Seaparankwe, born in the village of Qunu in the erstwhile Bantustan of the Transkei, recognised the burden of colonial and racial oppression and exploitation. He then joined the African National Congress in 1942. He was convinced by the belief his wise tutor, Walter Sisulu, had in the ANC as the means to effect change in South Africa. As he said,

He loved the ANC. Hence his frequent words that upon his death he would join "the nearest branch of the ANC in heaven"

In his lifetime of struggle through the African National Congress, he assumed and was assigned various leadership positions. He served with distinction. He was part of the ANC leadership collective and did not make decisions without first reflecting with his comrades. Yet he would fight for the principle of what was the right thing to do.

Madiba was also a member of the South African Communist Party, where he served in the Central Committee.

His was a choice to not only be a product but the maker of his and his people´s history.

He hated racism and bigotry; sought a united, non-racial, non-sexist and democratic society where all are equal. As he said while in prison,

"Ours is not to ask for equality on a lower scale;

Ours is to fight to win on an equal but higher level".

He passed the baton to the younger generation of his beloved movement, the ANC, to carry on with the vision of bringing about an equal and just society. The ANC continues in this task as set forth by him and those of his generation, living and deceased. Indeed, men and women such as Nelson Mandela,

"... when they pass they leave a vision of a new and better life and the tools with which to win and build it.

His life gives us the courage to push forward for development and progress towards ending hunger and poverty. As we said of him while still alive, and we say so now,

"We have you, Madiba, as our nearest and brightest star to guide us on our way. We will not get lost."
To the entire family of Mandela, we extend our heartfelt condolences. He was as much yours as he was ours, probably his dedication to the ANC family robbed you of a father. We will, from this minute on, as always, walk this journey with you to the end.

To his friends, in the ANC and across the globe and across all divide, be comforted.

To the people of South Africa, may your hearts be not in distress. He lives in each and every one of you and in your homes, because he gave of himself to all of us.

Let us celebrate the gift of his life from this moment on.

Let us honour his memory in a dignified way as his leadership and stature deserves.
Let us participate in all the activities organised in his honour in a disciplined and respectful manner, until he is laid to rest.