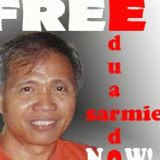 This development makes the resumption of the peace negotiations ever more difficult, as it exemplifies the grave danger posed on the lives of NDFP Peace Consultants as a result of the Aquino government's refusal to abide by outstanding agreements.
MEDIA RELEASE
By CPP Information Bureau
13 December 2013


The Communist Party of the Philippines (CPP) today condemned the Aquino regime and the Muntinlupa City regional trial court for convicting and sentencing National Democratic Front of the Philippines Peace Consultant Eduardo Sarmiento to 40 years imprisonment over trumped-up charges of illegal possession of firearms and explosives.

The conviction and sentencing was carried out by Judge Myra Bayot Quiambo of Muntinlupa RTC Branch 203 last Wednesday (11 December 2013).

Sarmiento serves as NDFP Peace Consultant for the Eastern Visayas.

He was in Metro Manila conducting discussions and consultations related to peace negotiations when he was arrested by the Armed Forces of the Philippines (AFP) on 24 February 2009.

“The conviction and sentencing of NDFP Peace Consultant Eduardo Sarmiento is in stark violation of the Joint Agreement on Safety and Immunity Guarantees (JASIG),” pointed out the CPP. The JASIG secures personnel of the NDFP and the government of the Republic of the Philippines (GPH) involved in peace negotiations against prosecution by either side. It prohibits either side from carrying out “surveillance, harassment, search, arrest, detention, prosecution and interrogation or any other similar punitive action” against the accredited personnel of the other party.

Sarmiento’s sentencing is also in violation of the Comprehensive Agreement on Respect for Human Rights and International Humanitarian Law (CARHRIHL) which upholds the GPH’s own Hernandez Doctrine prohibiting the state from criminalizing political offenses.


At least 13 NDFP consultants are languishing in various prisons and detention facilities under the Aquino regime because the acts they have allegedly committed in furtherance of their political convictions have been regarded as common crimes, such as illegal possession of firearms, murder, robbery in band and arson.


“This development makes the resumption of formal peace negotiations between the NDFP and the GPH ever more difficult as it exemplifies the grave danger posed on the lives of NDFP consultants as a result of the GPH’s refusal to abide by outstanding agreements,” pointed out the CPP.
“The CPP demands that the GPH rescind the conviction and sentencing of NDFP Consultant Eduardo Sarmiento. It calls on the human rights community, peace advocates both in the Philippines and abroad to stand together to defend the lives of all NDFP peace consultants and amplify the demand for their release.”


“Even under the GPH’s own laws, Sarmiento’s arrest and detention was illegal. He was taken into custody by the military without any warrant, in violation of his basic right against arbitrary arrest,” pointed out the CPP. “Furthermore, the supposed pieces of evidence against him were planted by the military operatives who carried out his illegal arrest.”


“The 40-year sentence imposed on Sarmiento constitutes cruel and unusual punishment on someone who was arrested and incarcerated for political reasons,” said the CPP.'