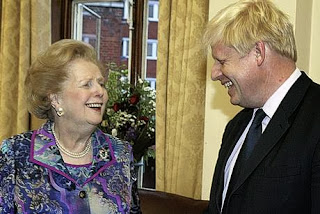 The undead are notoriously difficult to kill, the base reason being because they are already dead.


All the contradictions of British Conservatism in 21st century are here at Centre for Policy Studies speech of Boris Johnson  - getting excited when Britain ruled the world and proud that there were only 22 counties that Britain has not invaded left in the world  - but we still have time thinks our smart aleck.

Nobody's interested in the Empire death count. Its all King and Country and 1914.

The concept of Britain has long passed its sell by date, this 18th century merger of Empire with the notion of Britishness gestated in Tudor and Stuart England is dead, but the conservative ideology cannot recognise this death has Johnson is one of its zombies.

It is not only British Conservatism that holds onto the obsolete social construct of Britishness but also the Social Imperialist Labour Party the spiritual heirs of Robert Blatchfords Merrie England the Murdering Englanders of 1914.

Humour is great but the price of Boris's humour are the Empire which never counted its dead. Ernest Jones the Chartist leader said of the British Empire the blood never dried.

My view from the bottom looking up at of the Thatcher era in Wales was untold misery and heartache and the demolition of the twin pillars of the Welsh Economy Iron and Steel and Coal Industry that had taken 200 years to build destroyed in two terms of Thatcher Government.

The Centre for Policy Studies is a think Tank - Tank being the operative word with its love of British Militarism and its self contained universe in a tank that really thinks charity of the rich is the answer to our problems - get out of your tank and see the misery of Britain and its component parts England, Wales, Scotland, Kernow today not the fake government statistics for foreign consumption to attract investments that Boris is so proud of  - Tour your foodbanks in everytown this Christmas before you dine in your five star London restaurants and see the misery that is Britain.

*Greed is Good" tirade in the film Wall Street from Gordon Gecko.