Britain : What George Osborne did'nt mention in his Autumn Statement by James Meadway 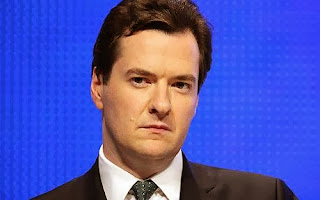 Democracy and CLASS STRUGGLE WELCOMES THIS ANALYSIS BY JAMES MEADWAY ON THE UK ECONOMY AND WE WISH TO POINT TO HIS COMMENT on LONDON.

"The problem is that economic growth in the UK is now hugely dependent on London’s inflating property prices, and it’s likely the bubble could spread".

We have Boris "Gecko" Johnson with his zombie economics to thank for this, London is the epicentre of our problems not the centre for our solutions.

England, Wales and Scotland and Kernow need defending from predatory finance from the City of London.

Talk about Christmas cheer. If you watched the autumn statement you’ll know that national income has risen for the last nine months of this year, unemployment has dropped, and even our struggling manufacturing sector is reporting a sharp recovery. Is George Osborne actually Santa Claus?
Perhaps not. As usual, it’s what the Government isn’t saying that actually matters. To get a hold on what the recovery really means for people’s lives and the future of our economy, we need to look beyond such broad brush indicators like GDP and employment.  Here are three key metrics that tell the real story:

Investment by firms is the life-blood of the economy. Without it, employment begins to dry up. Old machines must be replaced; new buildings opened; new technology developed. Spending by firms creates employment today, since it sustains demand, and paves the way for employment tomorrow.
Unfortunately, since the crisis our firms have opted to take a much less productive approach. Instead of re-investing their profits back into their business, UK companies (particularly the big ones) have distributed record amounts of profit to their shareholders and created an immense hoard of savings in the bank.

Deposits by UK companies in UK banks rose from £76bn at the end of 2008, to £419bn by July this year.
The collapse in investment spending as firm panicked after the financial crash was the biggest single culprit in our dramatic recession. And, down some £40bn on its previous peak, our investment spending levels still haven’t recovered. Despite a slight increase over the last three months, investment is down 6.2% over the year. As a share of GDP, it’s been on a steady downward slide for some time, as the graph below shows.

This is investment key to future economic progress. If companies do not start investing soon, there are no real reasons to suppose any apparent recovery can be sustained.

Rather than a recovery driven by business investment, household spending is largely responsible for our rising GDP. Household spending, as a share of all spending, has increased from 46.2% in 2011 to 46.9% today.
This is worrying because, as we know, average real earnings have fallen sharply. So the only way to explain the increase in household spending (given the decrease in household earnings) is that households must, in aggregate, be running down their savings, and borrowing more.
And this is precisely what the data shows. Household savings are falling at their fast rate in forty years. After falling since the crash, unsecured lending – borrowing on credit cards and so on - has picked up consistently over the last year.

Increased borrowing and falling savings are sustaining consumption. As Duncan Weldon explains, shifts in the household savings rate provide a key insight into the performance of the British economy over the last two decades or more. We are, once again, seeing the economy only begin to move because household savings are falling (and borrowing is rising).
To put it another way, this isn’t so much a recovery as a reversion: the whole economy snapping back into its bad old habits of debt-led expansion covering up for weak real earnings growth for most.

If the house prices in a given area far outstrip the average earnings, alarm bells should start ringing. Though not a perfect measure of affordability, the ratio gives us a good sense of whether the cost of housing is seriously above people’s real capacity to pay. If it is, it’s one sign that speculative purchasing is starting to push prices up beyond people’s reach, risking a bubble.
There have been warnings sounded recently that the UK’s recovery contains the early signs of a resurgent housing bubble. London house prices shot up 10% over the last month, with a third of properties paid for in cash (i.e. without a mortgage – a sure indicator that speculative money is rushing into the market). The graph below shows the house price to earnings calculation for each of the English regions, and for Wales, since early 1997. It steadily increased everywhere until the crash of 2008, which brought about a sharp fall in prices and so in the ratio. There is a clear outlier, however: since the crash, while the rest of the country has been stable, London property prices (relative to earnings) have rebounded. The ratio is now almost back at the level reached just prior to the crash of 2008.

This doesn’t mean a crash is imminent. With interest rates low and, for now, no disruption in financial markets that would be unlikely. The problem is that economic growth in the UK is now hugely dependent on London’s inflating property prices, and it’s likely the bubble could spread. If so, property markets will become increasingly risky and sensitive to a crash, and economic growth driven by borrowing will reappear. Fears of this bubble are the main reason the Bank of England, in defiance of the Treasury, has been trying to restrict mortgage lending.
Posted by nickglais on 12/05/2013 10:19:00 AM