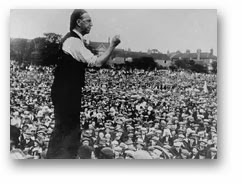 It is argueable that the South Wales Coalfield reached it highest degree of class consciousness in the period called The Great Unrest - Y Aflonyddwch Mawr in 1910 to 1912.

Its historic moment was the publication of Miners Next Step a document still worth reading with a section about leadership which has lessons for today and certainly anticipated the personality effect on the leadership of Socialist and Communist Movements in the 20th century.

The Miners Next Step was a product of the Miners Unoffical Reform Movement and one of  the authors of this collective work was A J Cook a Miner from the Rhondda Valley.

However this class consciousness was to evaporate into thin air in 1914 amid a welter of Anti German propaganda and a parade of Union Jackism.

W.F Hay was the exception that made a stand and put his head above the parapet and declared that he was opposed to the War and that War was :

"The Sport of Kings, the hired assassins trade"

Charle Gibbons of the URC joined the Medical Corp and people like Frank Hodges and George Parker who were linked to the URC declared themselves pro War urging Miners and others to enlist in the forces and fight for King and Country.

AJ Cook did not make any patriotic jingoistic speeches but choose to remain silent, he had written articles in 1913 in the South Wales Worker criticising the military build up but that was his limit.

We stressed in our First Chapter the psychological war in which the mass media principally the Northcliffe Press played in creating the anti German hysteria and how the radical population was stunned into silence with the honourable exceptions of Niclas y Glais and W F Hay in Wales.

1915 began to see some movement when the Miners Federation of Great Britain (MFGB) refused to be part of a Treasury Agreement giving up the right to strike and against a so called "Industrial Truce".

In March 1915 the MFGB demanded a 20% wage increase to compensate for the rising inflation during wartime.

The coalowners flatly refused and the South Wales Miners struck alone in 1915.

The Government intervened and agreed to an eighteen and half percentage rise. 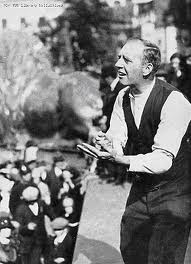 In South Wales it was as if the Unoffical Reform Committee was brought back to life and by 1916 AJ Cook was making his opposition to the war apparent and stated :


"Daily I see signs amongst the working class with whom I move and work of a mighty awakening. The chloroforming pill of Patriotism is failing in its power to drug the mind and consciousness of the worker.

He is beginning to shudder at the stupidity of allowing himself to be party to such a catastrophe as we see today.

The chains of slavery are being welded tighter upon than ever.The ruling classes are ever overreaching themselves in the hurry to enslave us.

Economic conditions are forcing the workers to think- the scales are lifting from their eyes.

Men are wanted who will give he lead.

Comrades I appeal to you to rouse your union to protect the liberties of its members.

An Industrial Truce was entered into by our leaders behind our backs which has opened the way to an encroachment upon our rights and liberties.

Away with the Industrial Truce !

We must not stand by and allow workers to be exploited and our liberties taken away".

AJ Cook has been described as a lightening rod for the Lewis Merthyr Colliery men and this speech in 1916 was indicating that he was going to be part of something bigger in future an anti War movement.

When the Government planned to lift War exemption for Miners and conscript 20,000 of them into the forces AJ Cook turned up his anti War speeches and actions. Notices appeared at Pit Heads telling Miners not to report for medical examinations for military service.

Soon after the Chief Constable of Glamorgan Captain Lionel Lindsey had Arthur Cook in his sights and requested the prosecution of AJ Cook under Defence of the Realm Act (DORA), but his requests were turned down.

AJ Cook was becoming more bold everyday and in 1917 and declared :

" I am no pacificist when war is necessary to free my class from the curse and enslavement of capitalism.

What then is my opposition to the "comb out".

As a worker I have the interests of my class than any nation.

The interests of my class has not benefited by the war, hence my opposition.

Comrades let us take heart, there are thousands of Miners in Wales who are prepared to fight for their class.

War against War must be workers cry"


On April 17th 1917 a mass meeting of Lewis Merthyr chaired by AJ Cook called on the SouthWales Miners Federation Conference:

"To get a resolution passed in favour of peace by negotiations"

In June 1917 AJ Cook and other Rhondda militants attended the Leeds Convention summoned to welcome the Foreign Policy of the Russian Provsional Government.

AJ Cook spoke in Ynyshir and Porth and declared :

"Since the day of declaration of war I have unflinchingly opposed the same. To hell with everbody bar my class. To me the hand of the German and Austrian is the same as the hand of my fellow workman at home. I am an internationalist. Russia has taken the step, and it is due to Britain to second the same and secure peace and leave the war and its cost to the capitalist who made it for the profiteer."

Certainly his silent opposition in 1914/15 had now become very vocal in 1917 and his explicit Marxist views were reaching the authorities again.

At a meeting at Ynyshir on the 20th January 1918 AJ Cook declared :

" Are we going to allow this war to go on ? The Government wants a 100,000 men, they demand 50,000 immediately and the Clyde workers would not allow the Government to take them. Let us stand by them and show that Wales can do the same.

I have two brothers in the army who were forced to join but I say No ! I will be shot before I fight. Are you going to allow us to be taken to the war, If so I say there will not be a ton of coal for the Navy."

In March 1918 the Home Office agreed with Captain Lindsey's request for AJ Cook to be charged under DORA along with his said accomplice George Dolling.

AJ Cook was sentenced at a crowded Pontypridd Police Court to three months in prison and George Dolling was acquitted.There were a few sporadic strikes in protest at AJ Cook's imprsonment but AJ Cook only spend two months in prison before being released and was back in the Rhondda by July 1918.

This later period also saw the formation of the South Wales Socialist Society really a revival of the old Rhondda Socialist  Society with AJ Cooks help.

The South Wales Socialist Society was open to all who accepted the class war theory and the society was composed of groups or trades that would consider their own problems and recieve the co-operation of the whole in bringing about reforms in their own industries.

The South Wales Socialist Society was strongly anti Parliamentarian and Syndicalist in outlook.This outlook was to dominate AJ Cook's thinking even in short lived further incarnations of his ideas like the Communist Party of Wales and the West of England.

We do not tire of repeating the immense hostility to anyone who questioned the First World War in Wales in 1914 and while we can be proud of Niclas Y Glais and W.F Hay we should not dismiss AJ Cook who bided his time until he could have some effect - which he certainly did from 1916 -1917 onwards.

The South Wales Coalfield like the whole of Wales and the British Isles succumbed to the worst excesses of Jingoism and Union Jackism. AJ Cook unlike Niclas y Glais did not have deep Welsh roots to fall back on has he came from West of England and the saw class struggle through British eyes and not the Welsh eyes of Niclas y Glais.

Essentially AJ Cook could not oppose British Imperialism or deconstruct and destroy it like James Connolly did in Ireland and John Maclean did in Scotland because he thought in terms of a British Labour Movement and absorbed the ideology of the centralising British Imperial State even though he was a syndicalist, even Niclas y Glais the best revolutionary Communist Wales produced joined the Communist Party of Great Britain, and the historic revolutionary moment following the Russian Revolution was stabilised by the British State precisely because the ideology that could have combined national and social liberation in these islands was not developed at the critical hour.

In fact the British State shot Connolly to death in 1916 and caused early the death of John Maclean in 1923 by forcing rubber tubes down his throat, the very men that combined national with social liberation were treated with the utmost brutality.

It made sure that revolutionary ideology of national and social liberation in the British Isles never got a grip in peoples consciousness has that would be end game for the British Imperial State.

The Left in Britain basically pursued Reform of the British State after 1920 and were scared to death of smashing the British State which would have been a consquence of revolutionary movements in Scotland and Wales and Kernow for national and social liberation in the 1920's.

Learning the lessons of revolutionary failure can be instructive if we have the will to revisit our past mistakes and draw lessons for the future - the movement that arose in opposition to the First War War throughout the British Isles is instructive in that respect and nowhere more so than Wales.