Chemical weapons were likely used by forces in Syria in five of seven attacks investigated in Syria, the UN team of experts said in a report released Thursday. 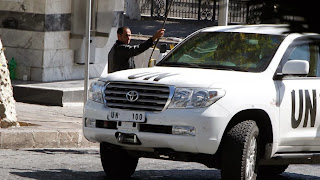 The United Nations has released its report on the alleged use of chemicals weapons in Syria, as investigators report evidence of probable chemical weapons use in five of seven attacks probed.
Chemical weapons were likely used by forces in Syria in five of seven attacks investigated in Syria, the UN team of experts said in a report released Thursday.

"The United Nations Mission concludes that chemical weapons have been used in the ongoing conflict between the parties in the Syrian Arab Republic," said chief UN investigator Ake Sellstrom.

The report said that in several instances, victims included soldiers and civilians. However, it was not always possible to determine direct links between the attacks, victims, and alleged sites of the incidents.

“The United Nations Mission collected clear and convincing evidence that chemical weapons were used also against civilians, including children, on a relatively large scale in the Ghouta area of Damascus on 21 August 2013,” the report concludes.

The UN team says this overall assessment is based on findings of “impacted and exploded surface-to-surface rockets...found to contain Sarin”; in areas around where patients were affected, the environment was found to be “contaminated by Sarin”; over 50 interviews with survivors and health workers provided “corroboration of the medical and scientific results”; many patients and survivors were “diagnosed as intoxicated by an organophosphorous compound”; and blood and urine samples taken from the same patients tested “positive for Sarin and Sarin signatures.”
Posted by nickglais on 12/12/2013 03:09:00 PM