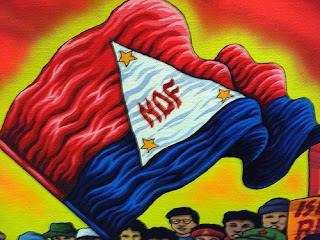 The Special Investigative Body formed by the Compostela Valley People’s Democratic Government recommended the immediate arrest and trial of the Respondents for the murder of Roque Antivo, and frustrated murders of Jefrey Hernan and Earl Jhun Antivo on 3 April 2013.

The Special Investigating Body composed of Osang Quijano, Mario Renante and Julius Senajon “recommended an order for the immediate arrest and commencement of the trial of the Respondents by a competent tribunal duly constituted under the revolutionary laws, legal and judicial system and processes of the People’s Democratic Government.”

Appropriate penalties will be implemented following the trial.

The Special Investigating Body which documented the circumstances surrounding the 3 April incident said the troops under a platoon of the 71st Infantry Battalion, led by 2nd Lt. Felipe Llorca, were responsible for the killing of 8-year old Roque Antivo, the wounding of his uncle Jefrey Hernan, and the severe psychological trauma of Roque’s elder brother Earl Jhun. It also found the Mabini police and members of the crime laboratory for having committed the cover-up in the crimes by “presenting, giving credence and by upholding the clearly tampered evidence at the crime scene, and for deliberately showing two sets of bullets to insinuate that two armed groups were involved in an armed encounter.”

The Special Investigating Body also indicted GPH Provincial Prosecutor Graciano Arafol, Jr.in Nabunturan town who issued a Resolution dated 17 September 2013, dismissing the charges filed by the family last 28 May 2013. His acts constituted of “abetting in the further denial of justice to the victims and their families by partially dismissing the case without regard to the direct and clear testimonies of eyewitnesses, by instead relying heavily on the Respondents’ unsubstantiated and self-serving alibis of a phantom encounter between the responsible AFP unit and the New People's Army.”

The Special Investigating Body also affirmed that Roque Antivo was not killed due to a legitimate encounter between the AFP and the NPA, saying that “(G)eographically and physically it would be impossible for the nearest NPA unit F2 platoon or even a detached team to arrive at about two hours later at Kidaraan,” the site of the incident. The indictment also said that because of the small number of empty shells found at the scene of the crime, it would be impossible to say that an encounter occurred on the night of 3 April, given that “AFP units have no fire discipline and that they expend bullets in the numbers in an attempt to show superior strength whenever they are in armed encounter with their enemies.”

The Indictment, likewise, singled out Maj. Jake Obligado, 10th Infantry Division Civil Military Operations Battalion Chief “for acts of bribery and for influencing the victims’ family to deny justice and erase culpability of the Responsible Army unit.” Obligado was said to have offered scholarship and small amount to the Antivos to prevent them from filing charges against the Army.

Antivo’s murder and the frustrated murders of the other two children show grave violations of children’s rights. As the AFP units desperately seek to control countryside villages, children who are at least 10 years old, or who looks 10 years old, are at risk of being falsely accused as NPA combatants and are thus considered enemies of the state.

Already exploited on account of poverty and oppression, children are deliberate targets of AFP operations in hapless communities that are suspected to be under the control or are supportive of the revolutionary movement.
Posted by nickglais on 12/12/2013 09:34:00 AM