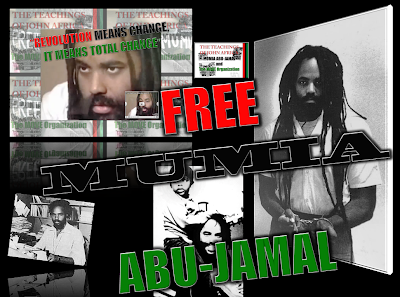 On Wednesday December 7, 2011 District Attorney of Philadelphia, Seth Williams, accompanied by Maureen Faulkner, announced at a press conference that he was not pursuing another hearing to reinstate the death penalty for Mumia Abu Jamal. This means that Mumia is now sentenced to life in prison without the possibility of parole. There is already talk about him now being moved into general population. Some people may celebrate this as a victory but MOVE is not under any illusions about these treacherous officials, we ain’t fooled one bit by their deviousness. We see this latest decision for exactly what it is- A devious tactic to kill Mumia in a so-called different way. Officials killed George Jackson in prison, they tried to get several different people to kill Leonard Peltier in prison and MOVE sees the same plan being laid for Mumia. This is personal for these cops and officials, they want Mumia dead just as much today as they have for the past thirty years, nothing has changed. They are furious with Mumia, with all the international support he has, with the strong consistant movement around Mumia. Cops see this as a contest, a contest they are determined to win, any way they can. That’s how sick and petty they are. They can’t stand the fact that Mumia is Black and that he sides with TRUTH over the lies of this system and they wana take him down, that’s how they determine winning. These cops and officials KNOW Mumia is innocent just like they know The MOVE 9 is innocent but they don’t care. They don’t give a damn about innocence or guilt, they don’t give a damn about Mumia’s life, they just want to win, which means killing Mumia.

These cops and officials are crazed and outta control about Mumia. They can’t tell you the name of those accused/convicted of killing cops six months ago, a year ago, five years ago but they all know Mumia’s name and they hate him. They’re not like this about other people; Ted Bundy, Lee Harvey Oswald (who was convicted of killing president JFK), Mark David Chapman (who killed John Lennon) or a host of other people accused of/convicted of murder, including baby killers. Again, MOVE ain’t fooled by their trickery, we’re gonna remain vigilante over Mumia and we remain unrelenting in our fight for Mumia’s release, based on his innocence. We’re gonna expose this devious tactic worldwide for exactly what it is, so if these treacherous misfits try to do ANYTHING to Mumia, they will be exposed to the world for the spineless punk-ass cowards and weaklings that they are. MOVE and Mumia supporters ain’t never gonna stop!

The International Family And Friends Of Mumia Abu Jamal and The MOVE Org.