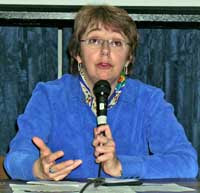 A political activist says that the United States federal government is illegally limiting the constitutional rights of local groups and protesters making up the Occupy movement.

The following is a transcript of the interview.

Press TV: Over 5,000 known arrests up until now, tell us more about the charges that the demonstrators are facing and are being held for.

And in city after city when people have assembled and gathered, there have been massive police arrests on all manner of completely fictitious charges, and the charges change again and again based on what the police claim: that their marching without a permit; that they're gathering where they can't gather; that they don't have a right to have tents or the right to assemble.

People absolutely have the right to assemble and the right to express themselves and make demands on the government, in every city.

And this is nationally coordinated by Homeland Security, by the national government which has gone to police departments around the country directing them in these crackdowns.

It's also important to say that it has not stopped the movement. Tomorrow morning will be the largest shutdown of the entire West coast port in many, many cities. There are reports on the West coast, on the Pacific coast, for the Occupy Wall Street movement particularly in Oakland, but as far up as Alaska and as far down as San Diego, California, at quite a number of ports.

The Occupy Wall Street movement, the long shore workers and the truckers have come together to make their demands because there are efforts to break the unions, to stop truckers from organizing unions. And so there is a coming-together of the resistance movement, the union movement, and other working people all along the West coast.

So it does that despite every effort at repression, this movement is finding new ways to resist and new ways to find allies.

Press TV: Would you say that the police upheld the "law enforcement code of conduct" in dealing with the peaceful Occupy demonstrations?

Flounders: Not at all. Again and again it's been on video shown around the world, the police using pepper spray against completely defenseless, seated demonstrators both in New York and in Davis, California; Sacramento and many, many other sites; here in New York, leading protesters onto the Brooklyn Bridge and arresting hundreds of them.

In every single city the tactics change, whether it's in Boston or New York and Chicago, in San Francisco, in Oakland, in Los Angeles. In every place, very vicious and brutal methods have been used to assault the protesters even when they were standing and doing nothing.

There's been no violence at any of these gatherings. These are political demonstrations against the one percent who rule everything.

And that's why the police and the powers-that-be consider this such a dangerous measure. It's why they're acting against people completely, peacefully and legally demonstrating and gathering.

And yet the actions - here the US government lectures people around the world, supposedly, to defend and protect democracy, to allow protesters to speak out - right here we see in cities across the US cracking down with brutal measure, with totally fraudulent charges.

Press TV: Do you know any of the arrested protesters who might consider themselves as political prisoners, or prisoners of conscience?

Flounders: Well, I think all of these people who've been arrested would consider themselves arrested for conscience, for the political acts that they take. There is also a strong legal and support solidarity movement.

So, many - overwhelmingly - who are arrested get out of jail. Although, they're facing charges when they go back to court, hundreds go with them in support actions, and that also has had an impact.

But the fact is that not one of these encampments should have been broken up in the first place, should have been attacked, their materials confiscated, all that is illegal. And the arrests and the charges on people's records - the fingerprinting, the handcuffing, all of that - completely illegal police tactics coordinated nationally, as I said, by Homeland Security.

This is a coordinated program going city to city, and acting with the police in this repressive measure. It hasn't stopped the movement.

And tomorrow along the West coast we're going to see, just knowing from people out there, knowing from the plans that are taking place at Oakland and in other cities, a new stage of the Occupy Wall Street.