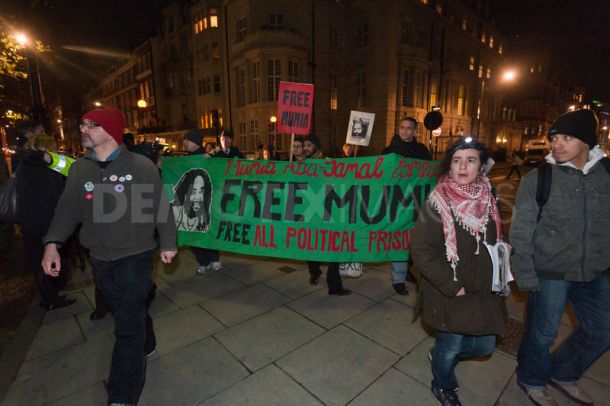 A sizeable number of the protesters marched from Speakers Corner, along Oxford Street calling for freedom for Mumia and for all political prisoners, before joining others at the US Embassy, Grosvenor Square.

Initiallly we shared the space immediately outside the Embassy with other activists who were calling for action to tackle climate change.

Speakers from the Irish Political Prisoners, FRFI, Pan African, UHURU, and others brought support from their organisations. Linn Washington from Philadelphia campaign joined us.

The campaign is delighted with the news that the state will not be seeking to reimpose the death penalty. But a message from MOVE reminded us this does not mean they do not want Mumia dead. The Police Federation and other reactionary forces are already threatening his rights and his safety in prison. Russia Today TV was there to record the protest and interview participants about why Mumia's case is important and why we believe he must be released immediately.

Members of the campaign then went on to a public meeting in support of Mumia held at Metrolpolitan University where comrade Togogara was speaking on behalf of the campaign.
Posted by nickglais on 12/10/2011 06:08:00 AM