Peaceful accomodation not Revolution is the real test - Prachanda 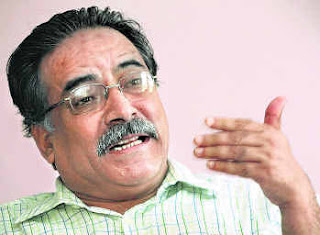 Publication of this interview is for information purposes on the two line struggle in Nepal and is not endorsement of the views expressed by Prachanda.


Democracy and Class Struggle opposes the liquidationist line of Prachanda and Bhattarai on Army Integration.


The liquidationist line of Prachanda  is made clear in the Kantipur interview published below.


Democracy and Class Struggle agree with CP Gajurel that Prachanda is no longer fit to be Chairman of the Unified Communist Party of Nepal.


The following interview with Prachanda is from Kantipur.

Maoist Chairman  Pushpa Kamal Dahal aka Prachanda is playing a key role in pushing peace and constitution process forward. Despite resistance from hardliners within his party, he has teamed up with Prime Minister Baburam Bhattarai in implementing the Seven-Point Agreement, earning admiration from even his strongest critics. The regrouping process of the former combatants has just been completed and now discussions about physically separating them and emptying the cantonments are already underway. That should take the integration process to an irreversible point providing further impetus to the constitution drafting process.

John Narayan Parajuli and Kamal Dev Bhattarai spoke to Dahal on Saturday morning about the regrouping process, allegations that the party pocketed money meant for the combatants, national unity government and a broader roadmap of the Nepal’s political process. He said that running the insurgency was relatively easy compared to the difficulties in selling the peace process to the party. Dahal painted a hopeful picture of the overall direction the country was in. Dahal refused to say anything provocative about the peace and constitution processes,which could jeopardise relations with other parties. Excerpts:

Will the cantonments be empty by the middle of this month?
There will be a formal programme to separate those choosing integration, rehabilitation and voluntary retirement. We still need to discuss few technical issues.
The spirit of Six-point Agreement [signed on the eve of CA extension] calls for conclusion of the integration and rehabilitation of process by the middle of this month. There are other issues too: Truth and Reconciliation Commission, Disappearance Commission. There are more related issues.
A majority have opted for integration. How would you address the excess number?
The news reports about numbers signing up for integration have been exaggerated. The number will come down as we go through the process as many injured have signed up too. The state has a special provision for the injured and that will automatically push the numbers down.
We have agreed to integrate 6,500 combatants and we are not in favour of requesting other parties to increase the number. We will hold discussion with other parties to solve few problems that have emerged, but we don’t want to start another debate about numbers. If there is an excess number by end of the process, perhaps we could think about their fate through a separate decision, but I don’t think numbers are going to be a problem.
Now it has emerged about 3,000 have deserted the camps?
I urge my colleagues in the media not to get carried away by the issue. Over the period of five years many of them have left for various reasons. This is not a big issue, as it is being made out to be. We are on the verge of completing a historic process and a few ups and downs are to be expected. There is no need to sensationalise this. My second argument is that combatants have been living in a jungle for last five years. They weren’t living a life of luxury. Some of the money has gone in allowance, some in rations, medical expenses, clothes and construction of the houses in the camp. My third argument is that the party hasn’t pocketed any of the money. As the Chairman of the party, I would like to clarify that the party hasn’t misused any of the money meant for combatants.
On integration and rehabilitation, many wonder if the Maoists will seek to renegotiate the terms of the integration deal. There is also a worry that party will keep a significant portion of the severance package offered to those seeking voluntary retirement.
First, we will hold discussion with other parties on the many problems including the numbers that emerged during the regrouping process. But we won’t seek to renegotiate the terms of the Seven-Point Agreement or in any way wish to undermine the agreement.  The discussion will be intended to solve problems. The Maoists leadership is very clear about this.
A Few days ago when the Prime Minister and I visited the  Seventh Division Kailali and Fifth Division in Rolpa, we heard that the party would take a cut from the severance package being offered to the those going on a voluntary retirement.
This is completely baseless. The party won’t take a penny of it. The party has a clear policy those getting a severance package from the government should keep it in full.  If any commanders have said differently, I urge the combatants to report it to the party headquarters.
But having said that, we have a few problems.  The fate of about 4,000 combatants declared ‘disqualified’ by UNMIN need to be addressed. In our eyes they are not disqualified.  The party is thinking about how to provide them employment or other facilities to address their needs.
Similarly, many former PLA personnel have been brought into the YCL, including division commanders. Those who have opted integration for integration could become major, colonel or even brigadier, but those who came to join the YCL are empty-handed so far. The party will address the issue of former PLA commanders who have joined the YCL
When will a national Unity government be formed?
An important agenda for the party is to form a national unity government. We would like to see a unity government within a week or two.
Who will lead it?
It will be decided through consensus. Ideally we would like to lead the government until the completion of the peace process, but we won’t insist it to the point of affecting the environment for consensus.
Will Baburam Bhattarai continue be the party’s candidate if there is an agreement for Maoists led national unity government?
Most certainly. We haven’t thought about removing Baburamji and fielding another candidate from the party.
What about Nepali Congress ‘claim for the leadership of the next government?
Congress has a legitimate claim. Maoists have led twice; UML has led twice; and for Congress to say that is our turn is a rightful claim. We have to respect that.
Have there been discussions between parties about the larger political roadmap including elections?
Yes initial discussions have taken place. Just yesterday [Friday], we finalised the calendar for constitution drafting. We want to see a rapid qualitative progress in the constitution drafting. If within next few days we reach an agreement on forms of governance and electoral system, this will untangle a big knot. A constitution is possible within six months, if that happens an election could be held at the earliest. If we complete the constitution in six months, we could go for elections in another six months.