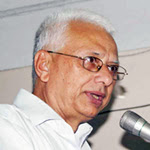 Telegraph Nepal, Sunday, December 11, 2011
On ideological grounds, Pushpa Kamal Dahal ‘Prachanda’ remains no longer the Chairman of Unified Maoists’ Party, so said Party secretary C.P. Gajurel while addressing a press meet in Nawalpur of Sarlahi District, December 10, 2011.
“Dahal has already abandoned the ideology charted by the peoples’ revolt…… How Dahal could continue claiming that he holds significant position in the party”, asked Gajurel and said, “He has no space in the party.” ……..
……… “Differences in the party have already crossed the toleration limit. Dahal is to be entirely blamed for the ideological aberrations”, Gajurel told the media adding, “It all started with the differences over petty issues. The differences have attained a new height following unilateral decision of the Chairman to return the seized properties, humiliating rehabilitation and integration of the PLA and the fresh controversial BIPPA agreement that Baburam signed with India.”
Gajurel also disclosed that majority of the party leaders were the adherents of his own panel.
“We are not at all against peace and constitution”, Gajurel claimed and concluded by saying, that “We want honorific and scientific integration of PLA in the Nepal Army.”
Every unnatural height has a definite fall.
Posted by nickglais on 12/11/2011 03:16:00 AM