A New Communist International ? The thoughts of Comrade Harsh Thakor 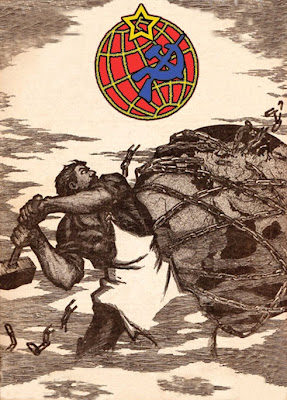 I think that the Revolutionary Internationalist movement contributed to the setback of the Shining Path Movement and Nepal by launching attacks on Stalin and some of the fundamental Marxist Leninist Tenets.It was premature to form such an organisation with inadaequate development of proletarian parties worldwide and the Communist Movement.Some of the most significant writings opposing the R.I.M.were of the late Comrade Harbhajan Sohi in his writings on 'Invincibility of Mao Tse Tung Thought.'

Remember the Chinese Communist Party never advocated the formation of an International learning the lessons of the experience under Stalin.Since the fall of proletarian power in the C.C.P. there is no Socialist base in the World. History remembers that despite the achievement of C.P.C under Mao ,the party did not go towards establishing he Communist International or establishing an International Organisation. Instead it stressed for he Communist Parties of the camp to apply he universal truths of Marxism-Leninism in the concrete situation of their country. It emphasized that other countries should not copy the Chinese Experience to-to but apply the Chinese experience in accordance to their own condition.

The main reason for the C.P.C’s caution was Imperialism was devising through its local regimes new forms of neo-colonial rule and only a native communist party could analsye and review such situations. An outside force could not grasp the concrete reality. Thus the necessity of political independence of each country’s communist party.

Chauvinistic tendencies may also develop under Communist Parties .The more developed and advanced may act chauvinistically and deliver big-brother treatment to the less developed or successful parties.

The victory of a revolution in a country under the leadership of a Communist Party indicates that certain crucial contemporary problems of he revolutionary movement have been resolved by it ,and thus the experience can be passed on to Communist Parties of othe Countries.At present there is no such party in the World.The ideological political struggle against Oppurtunism within the revolutionary Camp is firce and bitter in each country.

A dialectical process involving unity of Communist Parties is required. Mutual exchange has to take place Actual experience should be shared, which would pave the way for more advanced forms of collective positions on issues and ralying of more forces worldwide. Mutual Exchange and Common stands, bilaterally and laterally,and multilateral platforms on the basis of the general line are required

Today in India and in other Countries the reorganization of he Communist Party is still in the process of being realized It is crucial to struggle to implement the correct line and establish its content with opportunism. In this process Communist revolutionaries have to strive to achieve unity on the basis of settling various line questions in connection with the revolutionary practice of the masers of the Indian people.

A 2 line struggle should be struggled against the trend of the formation of R.I.M itself to advance the International Communist Movement.Remember even the C.P.I.(Maoist) or erstwhile P.W group were never part of the R.I.M,nor The Communist party of Phillipines,who are still positively struggling as a revolutionary force.
Posted by nickglais on 12/27/2011 09:50:00 AM

I find myself in agreement with Comrade Thakor although I feel a Communist Information Bureau a COMINFORM a suitable vehicle for international,class struggle.

This organisational form would carry out Comrade Thakor's

"A dialectical process involving unity of Communist Parties is required. Mutual exchange has to take place Actual experience should be shared, which would pave the way for more advanced forms of collective positions on issues and ralying of more forces worldwide. Mutual Exchange and Common stands, bilaterally and laterally,and multilateral platforms on the basis of the general line are required"