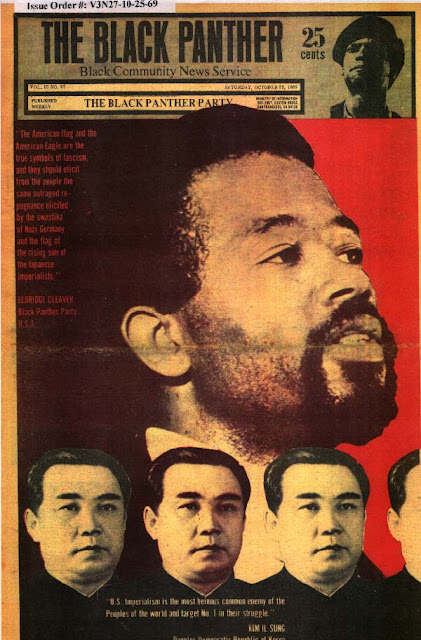 This was first published here by  Enaemaehkiw Túpac Keshena
http://bermudaradical.wordpress.com/2011/12/21/mumia-abu-jamal-on-the-nation-of-islam-kim-il-sung/


The following is an extract from Mumia’s book We Want Freedom: A Life in the Black Panther Party.
Competition on the Corner
The 3rd Avenue El in the Bronx was a major thoroughfare in the borough, and as such was a prime site for one trying to sell The Black Panther.
I had recently been assigned to the Bronx office and in an attempt to sell my 50 copies, I chose a stop on the line where the foot traffic would be quite heavy, as people descended from the elevated train ride. At roughly the same time, another young Black man elected to stop at the busy corner with the intention of selling his wares.
His wares were essentially the same as mine—newspapers. There, however, the similarity ended, for it was clear from his product that competition was inevitable.
The young man wore a dark-green iridescent suit and a brightly colored bow tie. His hair was cut close to his scalp in the “hustler” style, with a thin part cut in, his face shaved hairless. He carried with him a multi-colored plastic shopping bag that appeared to be filled with copies of Muhammad Speaks.
As I surveyed his wares, he was surveying mine. We looked at each other and understood that neither would relinquish the corner to the other.
And so, we began selling in earnest.
Shouts of “Help Us Free Huey!” mingled with “Salaam Aliekum, brother!” as we struggled to sell our product.
“Yo, brother! Find out what’s happenin’ that the white power structure ain’t gonna tell ya! Check out The Black Panther—only a quarter!”
“Salaam Aliekum, Sister! Come on back to your own! Read Muhammad Speaks! Twenty-five cents!”
For nearly an hour the sales continued, fed and famished by the flow of passerby debarking from the trains hissing to a stop overhead. After a while, we got into a conversation:
“Brother, you got to get with the Honorable Elijah Muhammad, and stop following those devils like Marx and Lenin and ’em.”
“Well, bro’—you should get with the Minister of Defense, Huey P. Newton, and the Black Panther Party.”
“You should follow a Black man, brother, not some Jews like Marx and Lenin!”
“We revolutionaries, brother, and we study about revolutionaries from around the world. We don’t care what race they is.”
“I can see that, brother,” glancing at a copy of The Black Panther, pointing to a cover picture of an Asian, full-haired man. “Who is that, brother?”
“That’s Kim Il-Sung, the leader of North Korea, and a revolutionary.”
“You see what I’m saying, brother? Here you go talking ‘bout another guy! He ain’t got nothin’ to say to Black people, brother!”
“Well, if that’s so, brother, why he in yo paper Muhammad Speaks?”
“What you talkin’ bout, brother?” he asked, seemingly stunned by the question.
I read and studied his paper quite regularly, for its layout, news, and commentary, but I doubted if he ever read any of ours. This seemed only logical for someone assigned to the East Coast Ministry of Information office, and I remembered reading this week’s issue of Muhammad Speaks.
“Check it out, brother, in yo international news section.”
In disbelief, he turned the pages until, sure enough, an article appeared bearing a photo of Kim Il-Sung. He looked at it, and then turned to me, smiling.
“Yes sir, brother. Yessir. Um-humm.”
“And what we learned from him was the idea of Juche, a Korean word that means self-reliance!”
Posted by nickglais on 12/28/2011 05:57:00 AM