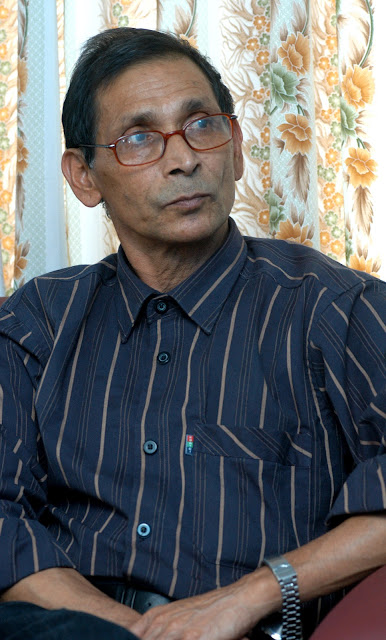 Democracy and Class Struggle says this report from Red Star is timely has disinformation is currently being spread about Kiran/Badal faction of UCPN Maoist - therefore be alert for fake reports and interviews.

Kathmandu, December 15: Senior Vice-chairman of UCPN (Maoist) Mohan Baidhya “Kiran’ has alleged on Wednesday that some media are interested to provoke fake updates.

Talking lately with media person of RSN, he said that neither his criticism had been asked nor he gave it to anybody.

After meeting over the internal affairs of the party and agreed to hold more discussions to sort out the problems and consolidate party unity with the top leaders of the UCPN-Maoist including chairman Pushpa Kamal Dahal ‘Prachanda and Prime Minister Dr. Baburam Bhattarai at Prachand’s residence in Nayabazar, Kiran clarified it.

In some media Prachanda reportedly held informal discussions in appointing Mohan Baidhya as the executive chairman of the party and the senior Maoist leader Ram Bahadur Thapa as the next prime minister replacing the incumbent PM Bhattarai, But sources said that such types of talking weren’t agendas.

“Rumours about the party split are baseless.” Kiran, who has been expressing note of dissent because of many decisions made by Prachanda, are derailing the party guideline in the recent times, told the reporters in Nayabazar.

Kiran dismissed the provocative remark that the party was just waiting for formal announcement of the split made by party secretary CP Gajurel, an ally to Baidhya, saying he did not know what Gajurel said and when.

Gajurel, had said, only a formal decision is to be unveiled about the Maoist split into two and to be addressed Baidya as Supremo, while addressing his cadres in Sindhuli on Tuesday.

Kiran clarified that proposals to make party general secretary Ram Bahadur Thapa ‘Badal’ the candidate of the Prime Minister of the consensus government were put forward in the different meetings.

“Putting forth of such proposals are natural in course of discussions pertaining to power sharing,” he responded when asked if the proposal was ever made. He, however, did not elaborate as to who made the proposal and when.

Though the Gajurel’s remark had been dismissed by Kiran, recently in some formal party programmes, he used to proclaim new birth of Maoist within it.
Posted by nickglais on 12/17/2011 02:18:00 AM