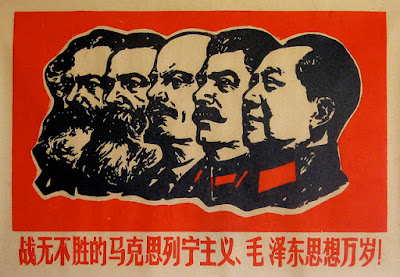 The impetuous rise of class struggle in the world has exposed the subjected
capitulation of prachandist revisionism in Nepal and the disappearance of
the leading role of the Revolutionary Internationalist Movement - RIM.

It has appeared that the Communist Party of Nepal (Maoist) - CPN (M), being
a RIM member, has raised in the name of Maoism against Marxism Leninism
Maoism, clutching a revisionist platform of renunciation of destroying the
old reactionary state, of betraying the People's War by renouncing to it, by
disarming the people, by dismantling the bases of popular power already
conquered and by dissolving its People's Liberation Army in the reactionary
army of exploiters, and finally by merging with the revisionist party Mashal
in the Unified Communist Party of Nepal (Maoist) - UCPN (M), and by
compromising with all others opportunist parties to defend the class
dictatorship of the landlords, the bourgeoisie and imperialism, and to serve
to run over the people.

It is likewise evident that the Committee of the RIM has, remaining silent
facing the revisionist line and the betrayal carried out by the CPN (M),
resigned in practice the role of being the international leading center, and
compromising the prestige of the RIM. It has cost a high price to the world
revolution and the international unity of the communists, allowing the
coexistence of opportunistic trends within the RIM, by the incorrect method
of restrict the lines struggle, and hiding the discussions to the
International Communist Movement - ICM and to the world proletariat.

Hence, facing the new problems caused by the deep world contradictions of
imperialism in the last decades, both the CPN (M) and the Revolutionary
Communist Party of the United States, seeing only the living appearance of
imperialism without going to the very agonizing core of capitalism, have
reached to the same revisionist conclusion: to declare null and void the
principles of revolutionary Marxism, and insufficient the universal theory
of Marxism Leninism Maoism to solve the problems of the revolution in this
century and, therefore, declared it overstepped in its "novel" revisionist
theories, made today under the ostentatious name of "Avakian's new
synthesis". Contrary to its hopelessness pessimism in the proletariat and in
the revolution, the new problems of our times have unleashed the world
forces of work against the imperialist parasitism, showing the orphanhood of
a world communist leadership, and with it the urgency for the international
unity of the marxist leninist maoists.

Against such a need that requires to differentiate and to break completely
with opportunism, rises again the familiar centrist tendency known in the
history of communist movement for its "conciliator" role between Marxism and
revisionism. A centrist tendency, headed today by the Communist Party
(Maoist) of Italy, direct continuation of the centrism in the RIM yesterday,
and mainly in its Committee.

In the open bourgeois degeneration of prachandism, the centrists, who
yesterday praised his theory, ignored the treason in Nepal and supported
bourgeois parliamentarism of the PCNU (M), declare today themselves to be
against Prachanda, but actually without breaking with prachandism.

They remain supporters of a fraction of prachandism that no longer
recognizes Prachanda as leader, but Kiran. They repudiate the current
symbolic acts of Bhattarai and Prachanda in the surrender of the revolution,
but deny the revisionist nature of the party and escape its responsibility
in the real political betrayal of People's War conducted in the Peace
Agreement of 2006.

Centrism both reconciles and calls "red" a fraction of the revisionist right
in Nepal, and fights angry against the revolutionary communists whom are
called "dogmatic-revisionists" and "opportunistic liquidators" for their
struggle against revisionism and centrism.

It fears the complete rupture, ideological, political and organizational,
with the revisionist line of the UCPN (M), a condition without which it is
not possible to conceive a true revolutionary line in Nepal, able to return
to the People's War and lead it, to conquer the triumph of the Revolution of
New Democracy in the whole country.

Before the visible collapse of the RIM, centrism that yesterday gave
legitimacy to the silent complicity, now denies that the RIM was defeated by
the revisionist line which it was unable to fight in their midst, and
attempts to revive it with the support of UCPN (M), but without the hegemony
of the RCP, USA.

Thus, centrism hides the main danger that represents revisionism for the
unity of the ICM, minimizing its treason to the world proletariat and its
outrages against the people of Nepal, opaque the vision of the communists
and prevents the workers of the world to clearly understand the role of
revisionism in the defeat of their political movement, contributing to keep
them away from the political problems of their revolution.

It is our unwavering commitment to fight for the international unity of the
Marxist Leninist Maoists, which requires the demolition of the false
revisionist theories and the eclectic positions of centrism, drawing a deep
demarcation between Marxism and opportunism in the whole general line of the
International Communist Movement, as firm foundation of unity to build the
new International that has to lead the grandiose battles of the world
proletarian revolution against imperialism and all its lackeys.

FOR A NEW COMMUNIST INTERNATIONAL BASED ON MARXISM LENINISM MAOISM:

The description of the Kiran/Badal faction has red faction of the bougeoisie is being tested at the moment at the UCPN Maoist Central Committee.

If there is no rupture from Prachanda and Bhattarai revisionism and liquidationism then the comrades who sign this document will be proved to be correct.