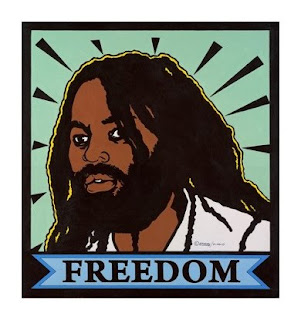 Prosecutors on Wednesday abandoned their 30-year pursuit of the execution of Mumia Abu-Jamal, the former Black Panther who was the victim of a racist legal system made him an international cause celebre.


Amnesty International, maintains that Abu-Jamal's trial was "manifestly unfair and failed to meet international fair trial standards," said the district attorney's decision does not go far enough. Abu-Jamal still has an appeal pending before the Pennsylvania Supreme Court over the validity of ballistics evidence.
"Amnesty International continues to believe that justice would best be served by granting Mumia Abu-Jamal a new trial," said Laura Moye, director of the human rights group's Campaign to Abolish the Death Penalty.

Democracy and Class Struggle says the attempt by the district attorney to prevent a new trial and keep Mumia Abu Jamal in prison after he has already served 30 years on death row is an insult to people's intelligence.

Justice is served by a new trial which Amnesty International has called for, which can present the new evidence that will finally free Mumia Abu Jamal.

The US and International Campaign to save the life of Mumia Abu Jamal has won a victory in preventing his execution.

Now there needs to be worldwide mobilisation to free him - join the free Mumia Abu Jamal Campaign in the UK in its protest at the US Embassy on 9th December.

There will be a demonstration marking the anniversary of Mumia's arrest and imprisonment on 9 December with a march from Hyde Park (Speakers Corner) at 5pm, and picket at the US Embassy until 7 pm.
Help us build for this event contact :
free2mumia@gmail.com