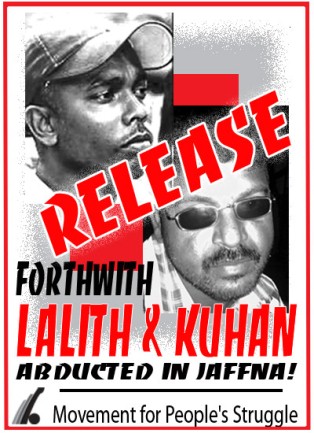 The Jaffna District Organizer of “ Movement for people's struggle’s ” comrade Lalith Kumar weeraraju and comrade Kugan Murugansan are missing since 9th December evening. This has happened while they were involving in organizing activities of a media conference to be held on 10th December in the Jaffna town.
These comrades has left comrade Kugan Murugansan’s home at about 5 p.m. by a motor bike bearing No NP GT 7852. Ever since they cannot be found and still they are missing .After the war Comrade Lalith Kumar consistently involved in several social and political activities in North and East area in order to exchange prevailing social problems in those areas such as missing people, political prisoners, abductions etc. On several occasions Army has arrested and detained him without any basis.
Furthermore he was assaulted by unidentified groups inside the high security zone ruling by Sri Lanka Army.
On March 2011 he was taken to army custody and he had been detaining for 6 hours inside dilapidated house questioning him unofficially. On November 2011 he was assaulted when he was in Jaffna.
Furthermore he was threatened by the Army and strangers not to do politics in Jaffna peninsula and induced him to leave Jaffna.
In the circumstances this abduction cannot be taken in isolation whereas it was well organized act having taken into all the above incidents.
More particularly the involvement of the Army is very serious against the people who are doing politics without holding weapons like Lalith Kumar.
Though leaders are chanting about the democratic rights of the people democracy has become only a nominal slogan using to deceive the international communities and general public.
This incident is a very serious issue and it is a clear cut violation of the fundamental rights of the people.
Everybody has a right to involve in politics as they wish. Dictators only restrict and or annihilate that universal right.
Two  protests were organised in Sri Lanka. Next week a protest  will organised in UK. Left forces throughout the world are invited to fight against fascist Sri Lankan  regime  which is alive  with   Indian expansionist   and western support.
Inioru.com
Posted by nickglais on 12/14/2011 09:35:00 AM