Wales: From Tryweryn to Aberfan - Lessons for Today by Nickglais 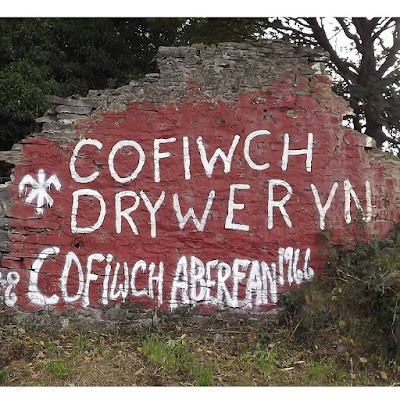 What have we learnt from Tryweryn ?

What have we learnt from Aberfan ?

“In the 10 years preceding [the flooding of the valley], the population of Liverpool had decreased some what.

“The water needs of the population in terms of drinking water decreased. But Liverpool was selling industrial water to 24 other authorities, making a lot of money – and it wanted to maximize that profit.

That’s what Tryweryn was about.”

In was also in 1959 that Plaid Cymru made the fateful decision to abandon direct action to save Tryweryn..

On 31 Jan 1959 Gwynfor Evans leads Plaid Cymru to reject direct action , a committee decision not of the Party.

At 9.15am on Friday October 21st 1966, after several days of heavy rain, a huge slag tip above the town of Aberfan in South Wales suddenly liquified and poured down the mountain.

The black tidal wave demolished properties in its path and engulfed the Pantglas Junior School in seconds.

Of the 144 people who lost their lives that day, 116 were children. The tragedy was totally preventable.

After the disaster, donations from all over the world poured in for the shattered community. However, most of the money never reached Aberfan.

Instead the Government gave it to the National Coal Board so that they could move other slag tips overlooking other towns in South Wales.

The Lessons of Tryweryn are clear Gwynfor Evans decision to abandon direct action was strategically wrong and the views expressed in 2007 by John Jenkins were correct.

Had Plaid Cymru announced at any stage prior to the valleys clearance that it had a task force which would literally fight anyone who attempted to forcibly remove the villagers and farm owners from their properties, then it would have stopped.

The lessons of Aberfan were that the (British) National Coal Board ostensibly a nationalised industry to serve the people was instead a state capitalist organisation more concerned with profit than lives.

Whilst we are also highly critical of Gwynfor Evans pacifism over Tryweryn because it was based on a false understanding of capitalism and Gandianism which we have critiqued elsewhere.

We take Gwynfor Evans masterful summation of what Tryweryn  means as it resonates today just as much as it did in 1959.

"To Tryweryn" - to exploit the land or natural resources of a small nation,or to destroy its social life or language, in the interests of a big neighbouring country or part of it. Gwynfor Evans

In 2012 Yr Aflonyddwch Mawr was formed in Wales to start the process of rectification of the mistakes of both the Welsh national movement and the Welsh Labour movement in Wales.

Yr Aflonyddwch Mawr in the coming years will turn  these two streams of thought  into a mighty river of national and social liberation of the Welsh People and usher in a new Welsh Socialist Renaissance.