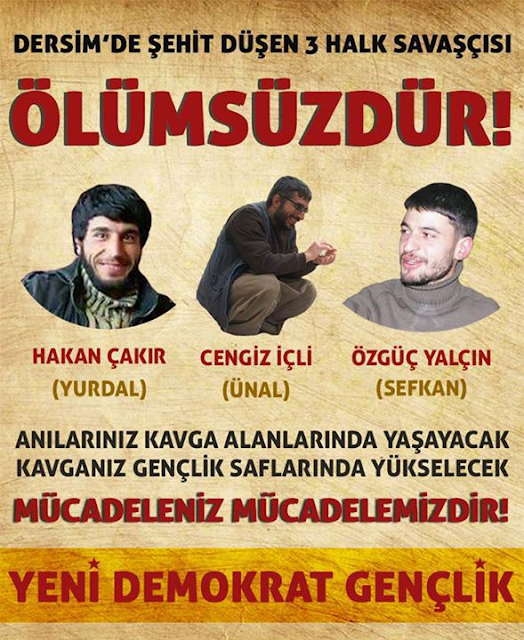 Information Center: Yeni Demokrat Genclik (YDG) made a statement on the TIKKO guerrilla fighters who died in Dersim, retracing the events of recent months in Turkey and Kurdistan.

All of these fighters for the people used to belong to YDG, and the youth movement honors those martyrs » Cengiz, Hakan and Özgüç … These comrades, with whom we have campaigned side by side, have long fought to expand the movement Yeni Demokrat Gençlik among young people and become a major force fighting against fascism.

These comrades, by martyrdom without surrender and by fighting, honored and praised the struggle of youth !

3 TIKKO guerrilla fighters died in a clash during a operation of the fascist Turkish state in Dersim / Ovacık (Pulur) on the night of 21-22 October. Three fighters of the people, Cengiz İçli (Ünal), Hakan Çakır (Yurdal) Özgüç Yalçın (Sefkan), who devoted their lives to the liberation and independence of the people, have fallen as martyrs during an operation, supported by aviation, who started around 23 o’clock near the village of Şahverdi in Ovacık.

Beginning with the Suruç Massacre, the fascist state of Turkish Republic launched a violent and total offense against the patriotic forces (PKK) and the revolutionary forces under the guise of « struggle against terrorism ».

While the state was exposed during this massacre, employing the barbaric activists of DAESH, it launched the offensive against progressive forces, shamelessly trying to blame the patriots and revolutionaries for it.

In these operations, more than 3,000 people were arrested and more than 1,000 were imprisoned. In parallel, the fascist Turkish state has stepped up military operations and bombings, inside and outside it borders. Bombarding the villages of Zergele to Kandil, the state massacred the people living there.

Likewise, using snipers,a massacres policy began when martial law was declared from Muş to Amed, in the four corners of Turkish Kurdistan.

With the same savagery that Israel demonstrates against the Palestinian people, the vicinity of Şırnak and Cizre was declared a Special Security Area and the army occupied the city and implemented a curfew for 10 days.

Dozens of people, including children and old people were massacred. In addition, by desecrating the naked body of Ekin Wan, who fell a martyr in a clash in the town of Varto in Muş, the state has shown once again how much it is afraid of women’s resistance.

More than 100 people died, and several hundred were injured, when the state, still using its puppets in DAESH, caused the massacre in front of the Ankara station on 10 October.

The State, with the AKP at its head, has shown us all the savagery which it can use against the people, and continues to show it !

While in the west, it attacks every protest and kill revolutionary activists in there homes, in the east, the state is bombing martyr’s graves.

Everywhere in Turkish Kurdistan, military operations are carried out in order to destroy and neutralize the guerrillas.

It is in this context that three women from the PKK guerrilla fell martyrs after the bombing operations on the martyr cemetery of Pülümür in Dersim.

All these actions, arrests, martial law and massacres, bombings or specific operations against the guerrillas have one goal: that the oppressed, our working class, give up the fight !

You cannot do it !

Neither arrests nor imprisonment, nor massacres will stop the legitimate struggle and resistance of our people !

The red flag that they waved on top of those mountains didn’t fall and will never fall.

They opened the wings of immortality on the way to freedom and salvation of the working class.

They fought for the liberation of Kurdish people whose language, culture, politics are ignored, cut into pieces by assimilation, destruction and denial.

They were fighting for the oppressed of each people and each oppressed belief, for every culture and prohibited creed. They resisted for the liberation of women, victims of domestic and marital violence who die every day at the hands of men. They fought against oppression, violence and terror by which neoliberal attacks rob the youth of the people.

Now each of them took an honorable place in history as a symbol of resistance. Each paid his tribute and was on each field of the struggles of youths, and now these have become immortal comrade by becoming an example for others.

Cengiz, Hakan and Özgüç … These comrades, with whom we have campaigned side by side, have long fought to make the movement Yeni Demokrat Gençlik organizing every young people and become a major force fighting against fascism. Our comrades were the developers and animators of our countryside, of our conferences and of our village activities.

These comrades, by martyrdom without surrendering and by fighting, honored and praised the struggle of youth !

We will raise on the highest mountains the flag that they gave us !

The People’s Fighters are Immortal !