France : Bloc Rouge Tribute to the victims of the fascist attack in Ankara 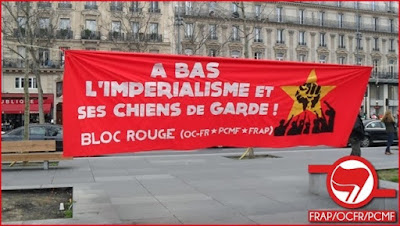 On October 10, 2015, a peace rally was organized in Ankara to the call of the union confederations and the Turkish and Kurdish democratic and revolutionary organizations.

At this popular mobilization, two bombs exploded in the middle of the crowd.

Currently the record is more than 120 dead and 250 wounded. As for the massacre of Suruç, the complicity of the Turkish state is obvious.

Following the attack, the Turkish police attacked the demonstrators with water cannon and tear gas, firing in the air even live ammunition to disperse the crowd and behaves the fascist government of Erdogan.

The fascist attacks against the Kurdish movement and the revolutionary left in Turkey have only amplify recent months. The massacre of Suruç have followed the attacks of the Turkish army against the PKK, the great waves of repression against the communist movement, the massacres of Kurdish civilians as was the case ICWRS and now a new attack.

The AKP and DAESH walk hand in hand to try to break the Kurdish national liberation movement and the revolutionary organizations in Turkey.

This of course with the active complicity of European and American imperialists through NATO affirmed "the right of Turkey in the fight against terrorism", that is to say, to suppress blood all movements going against the interests of the imperialist powers and struggling against the capitalist system.

More than moral support, the imperialist governments provide concrete assistance to the fascist regime in Turkey on European soil persecuting revolutionaries in exile. The arrests of activists of ATIK (Confederation of Workers from Turkey in Europe) are the sad example.

Today we wish to state once again our solidarity with the legitimate struggle of the Kurdish people and organizations representing their interests, and with our communist comrades who struggle in Turkey.

The fascist attacks used to terrorize the people, to muzzle it. But once again we can see that terror is not enough to lower his head to a people struggling for freedom.

Proletarian internationalism is more than an abstract idea, it is a struggle to lead and we will never let our comrades massacred without reacting.

We therefore call for participating in demonstrations throughout France alongside our fellow Kurds and Turkey.

We also call for an offensive rally in Clermont-Ferrand Saturday, October 17 at 14:30 Jaude square to affirm our solidarity with the Kurdistan and the revolutionary movement of Turkey.

Here we will ask to account imperialists who have always supported the AKP and we will answer blow for blow to the attacks against the international communist movement, including by targeting the interests of the Turkish government in France and frontally attacking the imperialists and their watchdogs .

SOLIDARITY WITH THE COMMUNIST MOVEMENT IN TURKEY!

LONG LIVE THE STRUGGLE OF THE KURDISH PEOPLE!

HONOUR MEMORY OF THE MARTYRS FALLEN FOR THE CAUSE OF THE PEOPLE!