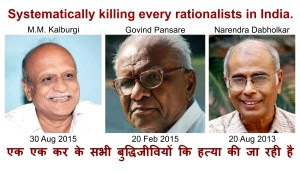 The dastardly murders of Dr. Narinder Dabholkar, comrade Gobind Panasre and Professor M.M. Kalburgi are an open and frontal onslaught upon the rationalists, progressive and scientific outlook by the obscurantist and communally charged fascist forces.

These murders are a gruesome manifestation of the coercive and repressive programme of these forces whose only aim is to gag the spirit of free and scientific enquiry, of the right to dissent, and to violently impose its own dictats upon the democratic spirit of the people.

The lynching of Mohammad Ikhlaque of village Bisara in western Uttar Pradesh by a mob instigated by these communal fascist forces has widened their stranglehold.

These forces have now expanded the reach of their terrorist attack to such an extent that is has brought the inner precincts of the privacy of people’s lives under their penetrative and murderous gaze.

These attacks have clearly brought to the fore the nefarious designs of these fascist forces to control and then to mould the lives of the people in accordance with what they want.

These conditions has pushed our people to such a juncture in our times where their communal unity has been imperiled.

In this fascist onslaught upon the lives of the people, the voice of dissent, which is the basis of democratic values has been put on notice and is being attempted to be silenced by these forces.

At this historical juncture, it is the bounden duty of every right thinking person to raise his/her voice of protest against these forces of obscurantism and right reaction, so that they can be effectively fought against.

We note the pain shared by these great minds to non response or delayed response not only of leading bodies but also of political leadership.

We appeal to all the right thinking and democratic persons, intellectuals, writers, painters, play wrightes, film makers to register their protest against the suppressive atmosphere of the fascism as evidenced in the killing of rationalists and other people.

Only these protests would become a potent ideological bulwark against the fascist forces and will ultimately help in defeating them.

By strongly endorsing this appeal we will not only be honoring and supporting these people who have jolted the consciousness of society and given a loud warning of future looming over us.