India : Narendra Modi must be called to account for the atmosphere of polarisation on beef and meat leading to Dadri murder 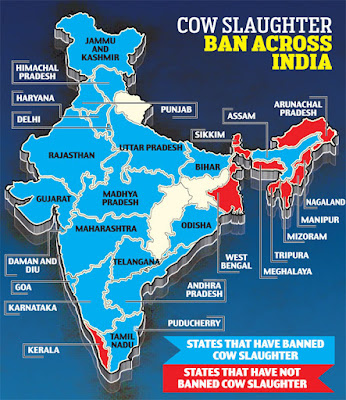 The series of beef bans and the atmosphere of polarisation on beef and meat has resulted in a mob lynching in Dadri, at just 60 kms from Delhi.

While it is true that the UP govt needs to be hold accountable for immediate action, especially in the wake of the news from Dadri that the local police has tried to threaten the suffering family against naming local BJP leaders, the whole incident should be seen in the context of Modi's own vitriolic against beef-eating, in the run up to the 2014 elections and before that.

Here are two videos where Modi is seen speaking on the issue of beef. And he is no different than Sadhvi Prachi and Mahesh Sharma, who are called 'fringe' elements despite their repeated communal exhortations that goes unchecked by Modi.

Let's make no bones in saying that Modi himself is the engineer of the beef ban gimmick.

Can Modi's role in turmoil be ignored?