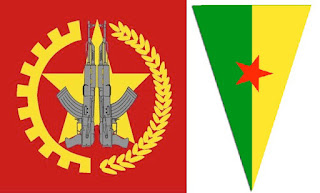 On October 10, guerrillas of the PKK and the TKP / ML-TIKKO organized joint action against the military base of Geyiksuyu in the province of Tunceli (Dersim region). From 7:15, the base was attacked on three sides with weapons of infantry and light artillery.

The video below shows the search operation of the Turkish special forces, backed by helicopter gunships Cobra, trying to catch the guerrillas after the battle.