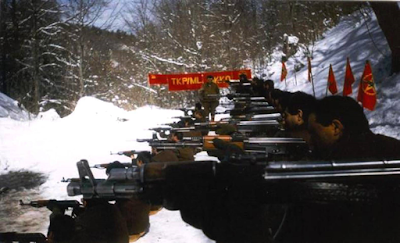 Urban militias and guerrillas of TiKKO, linked to TKP/ML, made several actions since the Suruç Massacre this summer.

TiKKO has been conducting operations for several months against Gendarmerie bases in Dersim province and has just suffered an assault led by the army. Last night, 3 militants were martyred during a clash.

Dersim : Specific actions against the guerrillas continued in Dersim. According to the information we got from our local sources, a major operation was organized yesterday by the Turkish army in the village of Mercan Şahverdi in the Pulur area (Ovacık).

Following this operation, three militants of TiKKO have fallen as martyrs.

We learned that the military operation, backed by aviation, which took place around the village of Şahverdi attached to the city of Ovacık in Dersim, lasted from 11 pm till 3 am.

During this operation, a clash broke out between the guerrillas of TKP/ML-TiKKO and the military.

According to the information given by villagers, 3 TiKKO guerrillas died following the clashes and the massive helicopter-led assault.

It was pointed out that after the clashes, and until morning, soldiers combed the whole area.

It was reported that in addition to the death of three guerrillas of TKP/ML-TiKKO, 4 villagers of Sahverdi were arrested and taken to Ovacık Gendarmerie post.

GLORY TO MARTYRS!!!
LONG LIVE THE PEOPLE'S WAR IN TURKEY!!!


VIDEOS FROM PEOPLE'S WAR IN TURKEY