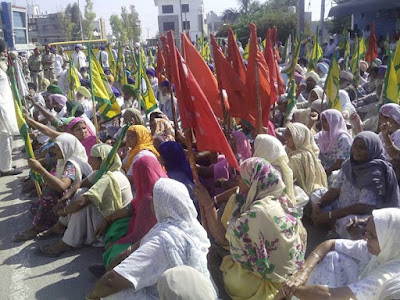 The state-wide gherao of eight peasant organizations in Punjab yesterday on October 23rd had a very successful impact in arousing the peasantry.

It turned out to be a real thorn in the flesh for ruling class politicians and exposed their true nature. In many parts of Punjab a police barricade was deployed to thwart the agitators and the peasantry responded by launching sit ins.High court areas were also blocked. Thousands were arrested when protesting and later released.

The boil and rage within the hearts of the peasants against the state’s policies was reflected .The agitation was reminiscent of a torrent erupting and a spark was literally turned into a Priarie fire.

The most significant role was played by the B.K.U.(Ugrahan) and it’s secretary Sukhdev Singh Khokri felt the gherao was successful and the agitation would be consolidated by a joint programme of al 8 peasant organization sin Ludhiana on October 26th.

The biggest mobilization occurred in the districts of Sangrur and Bhatinda followed by Muktsar and Mansa districts.Around 20,000 people were mobilized for the protest.

It was one of the best examples of protracted agitations of the peasantry at district levels and demonstrated the painstaking grass-root work done to organize the peasantry and raise political consciousness.

A light literally shimmered all over Punjab yesterday.

The methods of mobilization against police arrests and blockades was impressive and demonstrated the significance of protracted struggle.

We also learn the true nature of the ruling classes administration who use all possible means to trample on the peoples movements .The detaining of so many activists verified this . 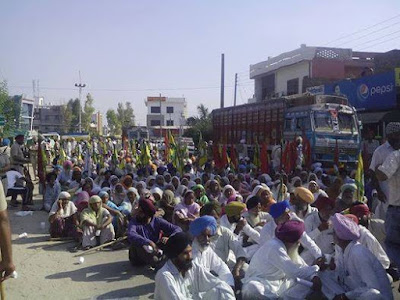 Farmers and farm workers carried out a protest march on the Moga-Ferozepur national highway today and later staged a demonstration in front of the residence of Agriculture Minister Tota Singh in support of their demands.

They are seeking higher compensation for cotton growers who lost their crop due to the whitefly attack and remunerative rates for basmati crop, besides other demands related to the welfare of peasants.

He sought the release of due payment of sugar cane farmers by private mills, debt relief and Rs 5 lakh financial assistance to next of kin of farmers who committed suicide. Farmers raised slogans against Chief Minister Parkash Singh Badal and Tota Singh and levelled allegations of corruption in the purchase of ‘fake’ pesticides for the cotton crop, which caused huge losses to farmers.

The BKU leader alleged that both the Chief Minister and Tota Singh had not pleaded the case of farmers before Prime Minister Narendra Modi due to which adequate compensation had not been released by the Centre.

He alleged that the Chief Minister did not listen to the problems of farmers, forcing them to take to the streets. The BKU leader threatened to intensify their agitation if their demands were not met by the government at the earliest.

He said the state government would be responsible for inconvenience being faced by the public due to their agitations. “We will not call off our agitation any cost”, he added. Dharna near Dhindsa’s residence Sangrur:

Hundreds of farmers and labourers on Friday staged a dharna near the residence of Finance Minister Parminder Singh Dhindsa. Despite the efforts of the police to prevent farmers from reaching Dhindsa’s residence, a large number of protesters gathered near the minister’s residence and staged a dharna for three hours.

He said hundreds of farmers could not reach Dhindsa’s residence as the police did not allow them to do so. He said these farmers staged dharnas where the police stopped them.

He said a demonstration was also staged at Chathe Nakte village, near Sunam. Protesters detained, released Hoshiarpur: Farmers and farm workers marching towards the residence of Chief Parliamentary Secretary Mohinder Kaur Josh for gherao were detained by the police on Friday. However, they were released later in the day.

Earlier, the protesters were stopped by police personnel in front of the local ITI where they staged a dharna. Alleging ignorance by the state and Central governments, the protesters also raised slogans. Farmer leaders condemned police action and demanded that a relief of Rs 40,000 per acre for farmers and Rs 20,000 for farm workers.

Chandigarh, October 23 Farmers and farm workers on Friday staged dharnas outside the residences of the ministers and other leaders of Punjab as per the programme announced earlier to press for their demand, seeking Rs 40,000 per acre over damage of cotton. Dharnas were staged outside the residence of Food and Supplies Minister Adaish Partap Singh Kairon, Markfed Chairman Jarnail Singh Wahad in Nawanshahar, Rajya Sabha Member Balwinder Singh Bhunder and Chief Parliamentary Secretary Prem Mittal in Mansa.

The talks between farmer organisations and Chief Minister Parkash Singh Badal here about a fortnight back had remained inconclusive. Meanwhile, over 100 farmers marching towards the residence of Chief Parliamentary Secretary Mohinder Kaur Josh in Hoshiarpur were detained by the police and later released, the police said.

They were gathering near ITI on the Jalandhar-Hoshiarpur road when the police came into action to thwart their action plan, the police said. In Sangrur, the protestors staged dharna in front of the residence of Finance Minister Parminder Singh Dhindsa despite barricades put up by the police, while they picketed the residence of Agriculture Minister Tota Singh in Moga.

However, the dharnas by farmers remained “peaceful”, the police said. BKU (Ekta) General Secretary Sukhdev Singh said the eight farmer unions and Khet Mazdoor union were forced to continue their agitation and made it clear that the unions have not withdrawn their protest but have only changed its mode.

Under the new programme, the farmers gheraod the residences of SAD-BJP alliance Cabinet Minister, Ministers of State and Chief Parliamentary Secretaries, he said. The farmers were demanding Rs 40,000 per acre damage of cotton relief, he added.

They charged the state government with not being willing to pay the sought relief. Earlier this month, the farmers had launched a ‘Rail Roko’ agitation against the Parkash Singh Badal government to demand for higher compensation. Initially, the agitation was for two days, October 7-8, but continued till October 12.

They called off their rail blockade agitation on October 13, but decided to gherao all state ministers, ruling party MLAs, other party leaders. There agitation is against the state government for non-acceptance of all of their demands, including higher compensation for cotton crop loss. — PTI 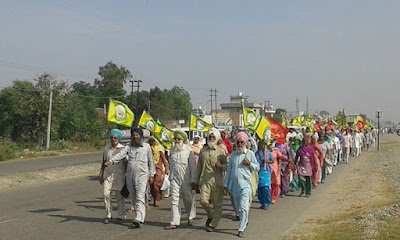