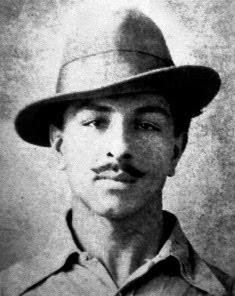 I greatly admired this campaign in Uttar Pradesh in honour of Shaheed Bhagat Singh which has great relevance in light of today’s Hindu communal; fascistic onslaught like the Dadri killing. - Harsh Thakor 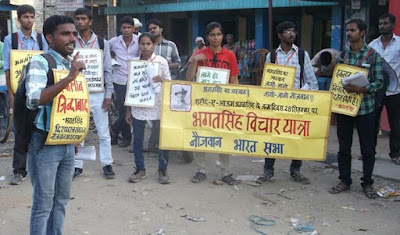 CRUSH THE MENACE OF HINDU COMMUNAL FASCISM WITH AN IRON SWORD AND REKINDLE THE TORCH OF SHAHEED BHAGAT SINGH T O LIBERATE INDIA FROM IT’S ENEMIES AND BUILD A SECULAR INDIA.

I just returned from Allahabad district in Uttar Pradesh to witness the concluding days of a campaign illuminating the flame of Shaheed Bhagat Singh.

It was staged by the Naujwan Bharat Sabha ,belonging to the Rahul foundation group.For 15 days a campaigning team of around 12 people traversed the regions of Allahabad, Gorakhpur, Azamgarh, Mau,Khalidabad,Devrai,Gazipur to conduct the

The rally was inaugurated on September 28th,the 108th birthday of Shaheed Bhagat Singh with a cycle rally in Jhunsi region of Allahabad.the participants vied to combat the onslaught of Hindu communal fascism.

.On October 7th In Azamgarh s march was stage in Khaliudabadfrom Sant Kabir Nagar. On October 8th in Chauri Chaura in Gorahpur district the team campaigned.On October 10th In Azamgarh programmes were re- launched in karke chowk,takia,Pahadapur,Shibli college,Pandey bazaar,Tiraha,brahamstan to Kartalapur.

On October 12th in Jhunsi village in Nikat district in Allahabad the programme concluded. Around 100 people converged to the meetings.

The best response of the yatra was in Azamgarh where the people of the village forced the participants to stay for another day.

They were greatly enthused by the activists of NBS.Over 25,000 pamphelts were distributed.
The main accent of the speakers was how the present rulers betrayed Bhagat Singh in the similar light of the late Congress leaders’ like Nehru and Gandhi.

They elaborated ho what the polarization between the rich and poor is sharpening, ho w the exploitation of labour is increasing, the extent to which the tentacles of Hindu communal fascism is sharpening and the need to rekindle the flame of Shaheed Bhagat Singh.

A speaker comrade Anghad superbly explained how few celebrate the pomp of glamour and wealth while the majority still struggle to obtain the basic necessities.

He also explained how Gandhi and Nehru’s policies were antagonistic to the ideology of Bhagat Singh and served the ruling class masters of today.

He explained how the rulers tried to use religion like the colonial British rulers to divide the people and divert them from their basic problem like unemployment and price-rise.

He gave examples of the extragavant lifestyles of the rich in contrast to that of the broad masses.

It is significant that in the city of Allahabad,one of the major political centres of the state the local inhabitants did not respond enthusiastically but those who came from the Zillas outside the city were far more responsive. 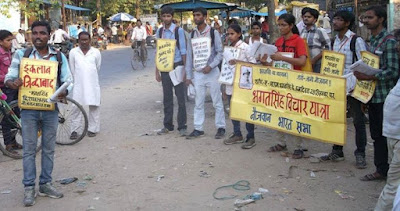 This is a significant lesson on the differences between the mindset of youth and masses in the rural areas from the urban areas. In the villages the local residents requested the participants to come again and quite a few felt like redressing their grievances.

One problem in the region of Azamgarh was from members of the Awadhi scheduled caste who reflected their casteist oppression and wished the participants could launch a caste perspective.

Significantly the Muslim minorities showed great co-operation to the campaign.

One villager told me “Such an event should take place all over the country.”In the village of Jhunsi I observed how the you identified with the spirit and aim of the campaign. What was heartening was the hatred the masses reflected towards the ruling classes and communalism.

However small section reflected communal ideology and found it hard to emancipate their minds from the clutches of Hindu communal propaganda.

The leader of NBS ,Prasen stated that the reactionary communal A.B.V.P.hardly has an influence in the hostels but forces their dictat on the students.He also expressed the ideological weakness of the left parties mass organizations like A.I.S.F,S.F.I,A.I.S.I,ETC who hardly stage any organized resistance to communal fascism.

An activist of Inquilabi Chatta Morcha was threatened and kidnapped by the A.B.V.P. who was critical of their remarks that Professor Kulbargi urinated in temples and ate chicken curry in religious places.

Sadly the organized left forces staged no resistance against this.

The participants of this NBS campaign wish to re-visit all the areas in which they campaigned and set up NBS units.They wish to redress the issues of the villagers and start work similar to what Shaheed Bhagat Singh did.

They plan to stage a gathering soon in Allahabad of around 100 people and are doing regular postering in trains.

I was greatly impressed by the discipline,determination, focus and enthusiasm of the participants of the Yatra in illuminating the flame of Shaheed Bhagat Singh.

They all displayed great ideological clarity and organization. Significant was the participation of comrades like Prasen,Anghad,Raju,Vivek,Amit and Pratibha.Prasen,Anghad and Raju were the main speakers.

Such youth have their hearts in the interest of the broad masses and are rekindling the spirit of the great Naxalbari Struggle. .

Such a yatra is an inspiration to the youth of the entire nation in traversing the path of martyr Bhagat Singh and ushering the new revolution.

Such youth are rekindling the spirit of the youth in the anti-colonial ,naxalbari, Punjab Students Union and agrarian revolutionary struggles of Andhra Pradesh,Bihar and Dandkaranya.

The most important factor is how Bhagat Singh’s ideology could be related to the burning day-to –day struggles of the people.

Revolutionaries will have to devise idioms to facilitate this