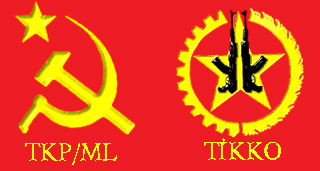 October 10, 2015 is a day that adds a new historical record of fascist state crimes.

Labour's Platform "Peace and Democracy" held a rally which suffered a car bomb attack in which 128 revolutionary, democratic, progressive people were slaughtered and hundreds injured.

This brutal attack took place in history as the bloodiest massacres in Turkey's history.

This massacre of organizations, is guided by the fascist dictatorship.

Turkish ruling class and its current representative of the AKP is responsible for this attack.

There is no doubt in anybody.

There is no doubt, because the fascist state is in need of this massacre.

Stuck in the quagmire of the Middle East policy, followed by the war policy on the Kurdish issue, the Turkish ruling class and its representatives cannot tolerate any kind of opposition to the AKP has brought to this road.

Fascist excess can only point to  a disturbed man who murders for the Turkish state.

Together with the movement of the jihadist organization  "the kill count of" cruelty and the details for the Turkish state in the hands of a small "problem".

All the responsibility of the Turkish state.

Fascist state, failing to reach their destination in the Middle East, the Kurdish issue  taking the lead as they want  a severe crisis to oppress our people.

Comprador bourgeoisie and big landlords experience problems in managing its internal political crisis created by the scramble and every day that they are now trying to keep under control with a bloody game.

Before starting this bloody game of June 7th elections it continued.

Kurds insist that the fascist monistic approach to the national question cannot win and the Kurdish National Movement came up the winning force.

HDP election rally was bombed and state-organized public lynching with fascist extension was put into operation all kinds of oppression and violence.

Despite all efforts, it could not be prevented from empowering the  HDP.

In Suruc they murdered 35 revolutionary youth.

Fascist dictatorship under the pretext of this massacre, the perpetrators of the attack "anti-terror" under the name of terror detain patriotic, revolutionaries.

At the same time warplanes bombed PKK camps in Iraqi Kurdistan and has launched operations against the guerrillas.

The Turkish ruling classes against the honorable resistance and struggle of the Kurdish nation.

In Kurdish towns dozens of people have been subjected to collective punishment prohibited by curfews and children killed.

Elected mayors arrested or flimsy grounds or been dismissed. During this process, thousands of patriots, revolutionaries and democrats were arrested, hundreds were killed.

Has been fueled chauvinism, the AKP has burned everything that belongs to the Kurds

These attacks have prohibited most peaceful and democratic response of those in power remain indifferent, it is trying to suppress gas and batons.

Fascist dictatorship wants the rose garden without thorns. So who wants peace, democracy workers in an authorized demonstration in Ankara is ruthlessly made the target of a bomb.

Fascist dictatorship has mobilized counter-jihadist forces. Against the government's policy of peaceful, democratic, basically also be opposed if the case "no matter what" punishment is given to messages with the bomb detonated in the heart of Ankara. Scare, intimidate, unresponsive to leave, aimed to subjugate the existing ones.

The silence of those who shout the truth is required. Now the same state most vigorously condemns this attack, to express the magnitude of suffering and satisfied "national mourning" are announced.

This is fraud. . Our people have rejected this fraud. The response after the massacre led to the fascist state without hesitation. In the streets, squares have cried out the truth of this scream. To quickly grasp the truth and the courage of our people is an utter disaster for the fascist state.

These revolutionaries, is the responsibility for the communist .

Communists and revolutionaries quickly grasp the fact that people should be seen as a justification for upgrading the revolutionary struggle and war.

Ankara must account for the massacre of our people -   only possible response to this - is  the need for revolution.

We must grasp the public streets and squares in the mountains, in factories, in schools, it is possible to merge in all areas of the fight in the fields.

Smash Fascist state -  Liberation and the People's War, it is possible to organize the overwhelming power.  The blood that we shed fighting fascism, we will ask the account of the massacre in Ankara!

Down with imperialism, comprador capitalism, feudalism and All Forms of reaction!