TURKEY : AKP FASCISM IS TRYING TO USE MASSACRES TO MAKE THE PEOPLE SURRENDER! WE WILL NOT SURRENDER! 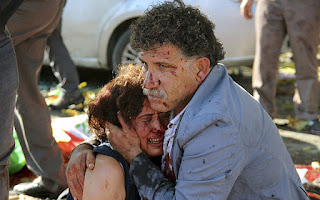 (Translation of leaflet handed out at protest march in London today)

AKP FASCISM IS TRYING TO USE MASSACRES TO MAKE THE PEOPLE SURRENDER!  WE WILL NOT SURRENDER!

Yesterday Roboski, Suruc, Diyarbakir, Cizre, today Ankara... The murderous AKP government and its collaborators which has already turned our country into a lake of blood are continuing to fill the streets with our corpses.

AKP fascism has once again confronted our people with a massacre.

Those who massacred our peoples in Cizre  and who killed Gunay in Bagcilar committed this massacre.

As their crisis caused by being unable to rule deepens, they become more aggressive.

In his pamphlet "The United Front and the Political Crisis" Dimitrov wrote "As this political crisis deepens gradually, a major question of power necessarily arises".

It is clear that this attack is essentially about the question of power.

It has increasingly become clear that the ballot boxes cannot resolve it.

It has become clear that only with people's power can the peoples have democratic rights and the right to live. And there are two ways out of this political crisis.

One is the road used by imperialism and its collaborators, the other is the people's road towards a solution.

Imperialism and its collaborators slaughter the peoples in Anatolia and the Middle East and protect governments that engage in tyranny.

Against this the peoples by waging wars on fascism and imperialism seek to gain power or rights.

The government is attacking in order to suppress this opposition and stop it from being directed against itself.

Dimitrov says "But this road to a capitalist solution is full of countless negative things for the people and the country, external dangers aimed at freedom, independence and peace make the path of a military or fascist dictatorship impossible to escape."

It is clear who is responsible for the massacre. Imperialism and the collaborationist AKP government carried out the Ankara massacre.

There cannot be peace in a country with fascism, nor can there be democracy.

The liberation of the peoples can be achieved however by uniting their struggles.

We offer our condolences to the people of Ankara and our peoples and we hope the injured will recover as quickly as possible.

Wherever we are in the world, now is the time for us to go out into the streets.

Let us show the collaborationist AKP government that the people are not "incapable of ruling".

The massacre in Ankara is partly about getting the peoples of Turkey to give in.

THOSE RESPONSIBLE FOR THE MASSACRE IN ANKARA ARE IMPERIALISM AND THE AKP!

We will not give in to AKP fascism

WE WILL DEMAND A RECKONING FROM THOSE WHO CARRIED OUT THE MASSACRE!
Let us unite, fight and win against imperialism and fascism!


(Steve Kaczynski  translation of a statement  from halkinsesitv.org . You are welcome to pass it on. ) Statement by Turkish-language socialist weekly magazine Yuruyus ("March"), October 10, 2015

With every passing day there is more news of massacres, every minute there is a new death... The dirty reckonings of the AKP and imperialism bring more deaths and  massacres to the peoples...

First they massacre and then they bring in broadcast bans because they want to condemn to silence the anger and pain of the people!

Do you think you can escape the anger of this people?

Do you think you can silence dances, laments, marches?

The Council of Ministers took a decision, it said, but will it silence this people? Do you think that you can obstruct the truth if you silence all channels, TVs, newspapers?

The murderous AKP government slaughtered in Cizre, Suruc and Nusaybin, but that did not quench its thirst for blood.

And now with the demagogy of "secret forces" being manipulated it is trying to escape responsibility for the massacre in Ankara!

It is not that simple, what will you do about the bodies of those you massacred? How will you conceal them?

Did you think this people will forget the young who have been killed?

Neither this people nor the revolutionaries who do not hesitate to give their lives will forget these massacres.

We do not recognise your laws, and you will not be able to close the book on massacres!

If you silence all the press you will not silence Yuruyus magazine!

If you clear the murderers in your courts you will not be able to save them from people's justice!

A reckoning will be demanded from AKP fascism for its massacres!

All those who carried out massacres are in the dustbin of history while this people gave their children names like Mahir, Deniz and Ulas (translator's note: names of revolutionaries in Turkey killed by the state) and pressed them to their bosom.

Those you slaughter will produce far more Mahirs and Ulas's, a reckoning will be demanded in this world, not the next. We will not be silent about massacres and we will not forget them! 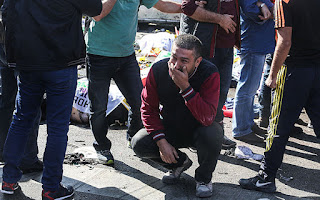 
This article from the Haber Sol "Left News" website associated with the TKP reported that Islamic State rejoices over the deaths and hopes the number of them increases. Probably statements in English will emerge soon and when they do, from various left quarters, I will pass them on to you.