India: The Myth of the Hinduvuta Fringe by Bappa Sinha 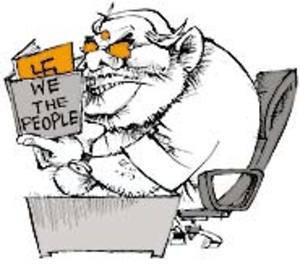 The corporate media has pushed a narrative of the “Hindutva Fringe” that is responsible for irresponsible actions, hate speech and whipping up communal frenzy while Modi and the core of BJP are responsible actors concerned only with development.

They lament that Modi's development agenda is being hijacked by the Hindutva hot heads in RSS, VHP, Bajrang Dal and even within BJP. So, each provocative statement from the likes of Yogi AdityaNath, Giriraj Singh, Sadhvi Prachi, etc. are brushed aside as statements from the lunatic fringe which should be safely ignored by the masses who should  focus of the “development agenda” of Modi.

Leaving aside the myth of development under Modi which is an empty slate for the people even after one and a half years of Modi coming to power, nothing could be further from the truth. In fact, the RSS itself has always pushed the narrative of the core and the fringe in order to distance itself from criminal activities when they get exposed. This was true way back when Godse assassinated Gandhi to the last NDA regime where Vajpayee was portrayed as the moderate responsible core and Modi was the irresponsible fringe during the 2002 Gujarat Riots.

The recent Dadri Lynching incident where a BJP Mob barged into the house of a Muslim man, Mohammad Akhlaq and bludgeoned him to death and seriously injured his son Danish, exposes this narrative as completely false and in fact amounts to nothing more than apologetics for the fascist violence of the Hindutva forces under the leadership of Modi and Amit Shah.

The Dadri incident wasn't a spontaneous event but a deliberate and planned attack by BJP. False rumours were floated about Cow slaughter and a temple loudspeaker was used by the local priest to rally the faithful to seek retribution. Social media was also used to spread these rumours. 8 of the 11 named in the Dadri Lynching FIR are relatives of local BJP Leader Sanjay Rana including his son Vivek. A FIR was also lodged against Ritu Rathore, a member of BJP's social media team, for spreading false communally sensitive rumours about the Dadri Lynching.

Days after the lynching, Meerut BJP MLA and Muzzafarnagar Riot accused, Sangeet Som went to Dadri to further stir up trouble. Invoking the MuzaffarNagar communal riots of 2013 Sangeet Som threatened the minority community with “retaliation”. While brazenly justifying the murder of Akhlaq, he asserted that all those arrested were “innocent” and demanded their release. On a side note, it turns out Sangeet Som is the owner of a Meat Processing Plant - Al Dua which is involved in export of Beef. What Hypocrisy!

But BJP's brazen whipping of communal frenzy and hate speech doesn't stop at Sangeet Som. BJP MP and National Executive Member Yogi Adityanath  then jumped into the fray and offered guns to the "Harassed Hindus" of Dadri.

Union Culture Minister Mahesh Sharma started handing out innocence certificates to the murderers by saying the lynching was an accident and that the nature of the injuries prove that the mob had no intention of killing Akhlaq. He further claimed that the mob hadn't molested Akhlaq's daughter as proof of its noble intentions. Not to be left behind, Union Agriculture and Food Processing Minister and MuzzafarNagar Riots accused Sanjeev Baliyan said that if Cow Slaughter wasn't stopped more such incidents were likely to happen. BJP MP Sakshi Maharaj said he was “ready to kill and get killed for cow slaughter”. Union Minister Giriraj Singh and ex-Deputy Chief Minister of Bihar Sushil Modi continue this shameful parade with more provocative statements about cow slaughter.

Modi himself kept silent and let his henchmen do the nasty talking for the first few days after the incident. When he finally broke his silence, it was not to condemn the murder of an innocent man whose son is an Indian Air Force personnel but to take on Lalu on his comment that many Hindus eat Beef. He couldn't get himself to even mention the Dadri incident but instead made some vague mutterings on the need for Hindus and Muslims to stop fighting each other. Well, Hindus and Muslims are not fighting each other. BJP/RSS criminals are engaging in murders and rioting. Riots have also spilled out in Modi's constituency Varanasi and Mainpuri near Agra.

Repeat after me - the fascists are ruling the country