Welsh Independence No ! Why Not ? by Gethin Ap Gruffydd 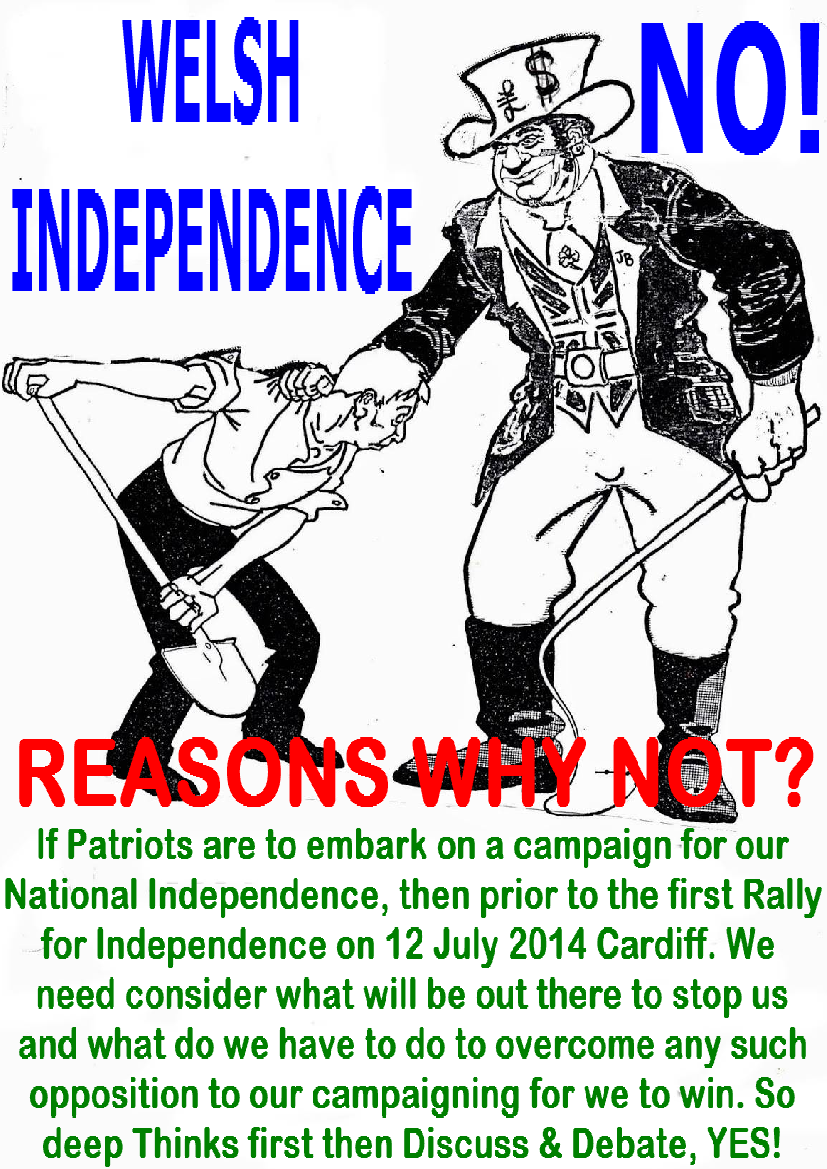 A Struggle for Welsh Independence is a long way away but still even a campaign will be hard going and to half way succeed we need to know what we are up against and ask ourselves how much will Plaid Cymru be to the fore and for instance how many of all those 'Grant Grabbers' at the recent 'Dinefwr Fest' will be on side as many 'Creatives' are aboard the Scots Campaign?

An interesting first step maybe, would be getting some stars and various creatives plus of course 'Intellectuals' to pay for and sign a 'YES TO WELSH INDEPENDENCE' advert in Welsh Daily News papers or maybe Daily Wales web paper could invite such prior to the fourth coming Rally For Welsh Independence, Caerdydd?

Before a really radical serious Struggle for Welsh Independence' can be engaged in as Geoff Ifans 'Hawliau' constantly reminds us, like in Alba, Catalonia and Euskadi, it would be useful and illuminating to see if above and 'Y Crachach Newydd' are up front in the Vanguard or well to the rear still in the trenches of the 'Arts Council of Wales' etc making a quite cultural creativity life preferable to the pain of Patriotism?

Do read your history, not least on the corruption of the Bards to support the Richmond Rubbish 'British Protestant Reformation' at two Caerwys Eisteddfods, take it from there, see my ANGHOFIO blog to really know what we will be up against UNCLE TAFFY TREACHERY AND MORE SUCH TREACHERY, not just Cerys Mathews, the Welsh Traitors are Legion. Just remember Investiture' 69, not much has changed.
Gethin. 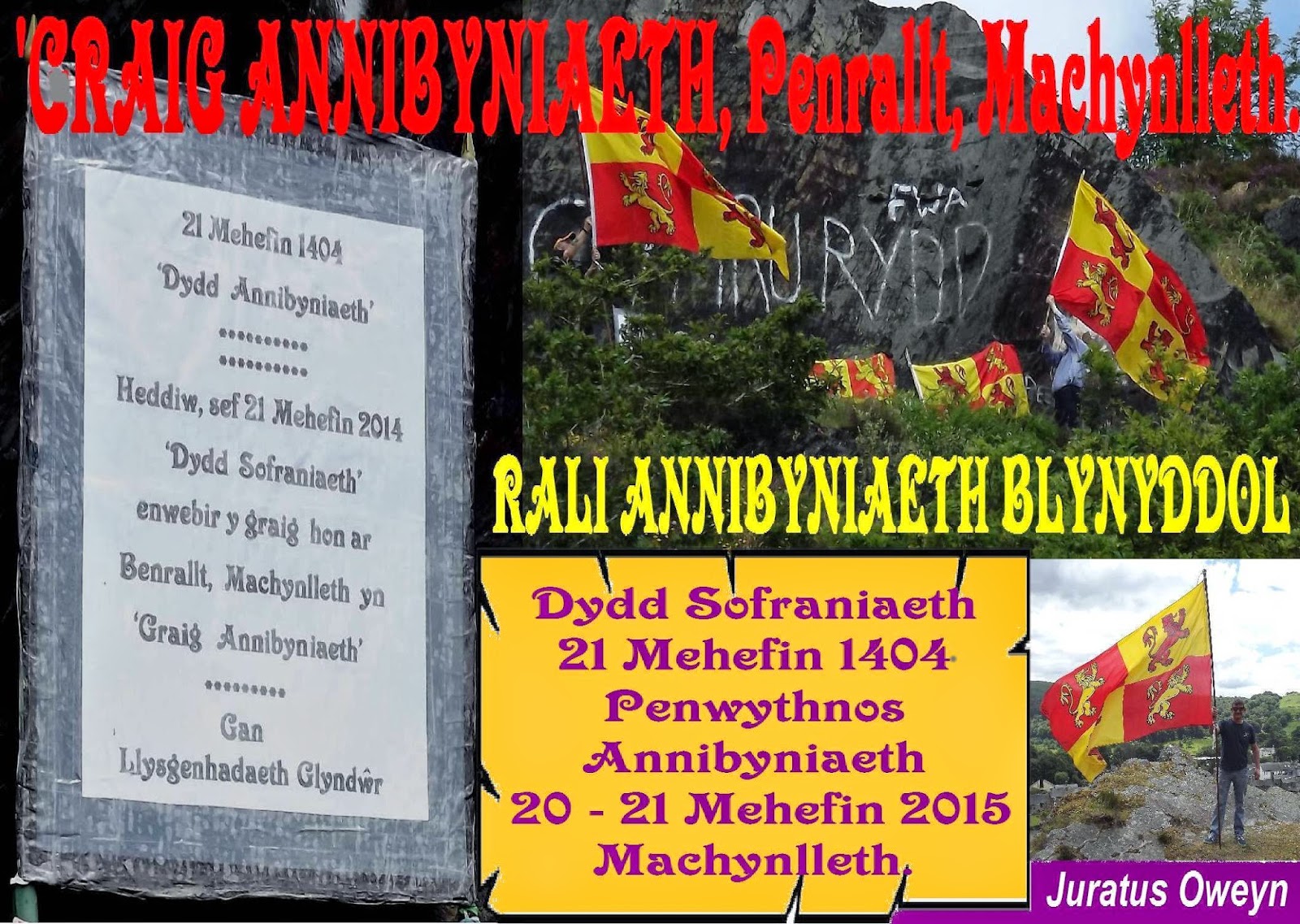 fb FANTASY OR EMBASSY GLYNDWR REALITY? - THE CHOICE IS YOURS BUT FACE FACT IF YOU WANT WELSH INDEPENDENCE YOU MUST REALLY WORK AT IT AND SO FOR STARTERS THAT MEANS DELIVERING NEXT YEAR AND IN YEARS AFTER WHAT YOU MISERABLY FAILED TO DO THIS YEAR COMMEMORATE AND CELEBRATE THE GREATEST DAY IN OUR NATIONS HISTORY AND WITH THE WAY THINGS ARE GOING 21 MEHEFIN 1404 WILL BE THE ONLY 'INDEPENDENCE DAY' WE WILL EVER HAVE, FULL STOP!

I THINK NATIONALIST ADDICTION TO DEFEAT AS SHOWN IN RALI CILMERI AS THEIR 'SHOW STOPPER' SAYS IT ALL AS DOES THIS RATHER SAD DISPLAY OF WELSH NATIONALISTS WINDING THEMSELVES UP ON THE SCOTTISH INDEPENDENCE REFERENDUM 'YES' CAMPAIGN, ALL VERY WELL BUT WHEN INSTEAD OF 'DREAMING OF FREEDOM' IN SCOTLAND, CATALONIA AND EUSKADI ARE YOU ACTUALLY GOING TO FIGHT FOR IT IN OUR COUNTRY.

HOPEFULLY, THAT 'RALLY FOR WELSH INDEPENDENCE' DOWN IN 'BAE CAERDYDD' WILL BE MORE THAN FLUFFING UP 'CYBER NAT' FEATHERS BUT THE BEGINNING OF THE END FOR ENGLISH RULE IN WALES WHICH YOU CAN BRING A LITTLE CLOSER BY TAKING THE FIGHT UP ON TO THE HILLS OF MAWR THIS AWST TO GIVE THE 'UNHOLY ALLIANCE' OF ENGLISH ARISTOCRATIC 'BEAUFORT BUNCH' AND RWE ECONOMIC NEO COLONIAL CAPITALISM SOME RADICAL CONFRONTATION AFTER WHICH TAKE THE STRUGGLE TO AN INDEPENDENCE RALLY IN RUTHIN AND ON TO THE VYRNWY ESTATE IN MEDI TO OPEN UP A 'SECOND FRONT' AGAINST SEVERN TRENT AND 'UNITED UTILITIES'.

NOW THAT' IS HOW TO KICK OFF AN INDEPENDENCE STRUGGLE! 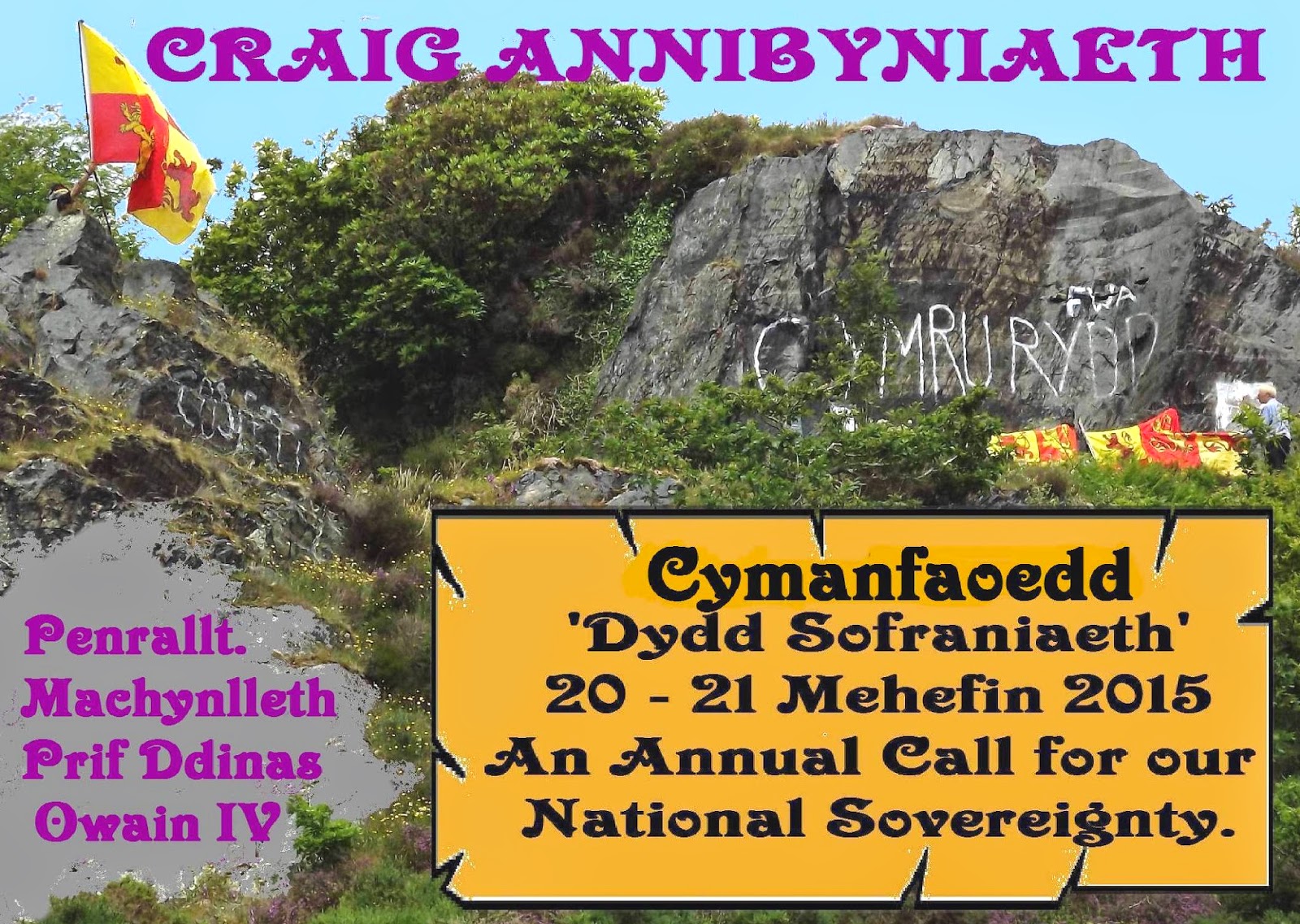 ASAP: Get ready for 12 July Cardiff Bay Independence Rally, loads of Independence Placards and Banners needed plus of course as many 'Baneri Glyndwr' as possible to fly in face of the 'WAGGERS', forget the 'Richmond Rag' as that is too associated now with English Royals visiting our Country, means nothing as far as our National Independence struggle is concerned but Baneri Glyndwr will say it big time. If you do not have one, then order one now from sianifan@sky.com 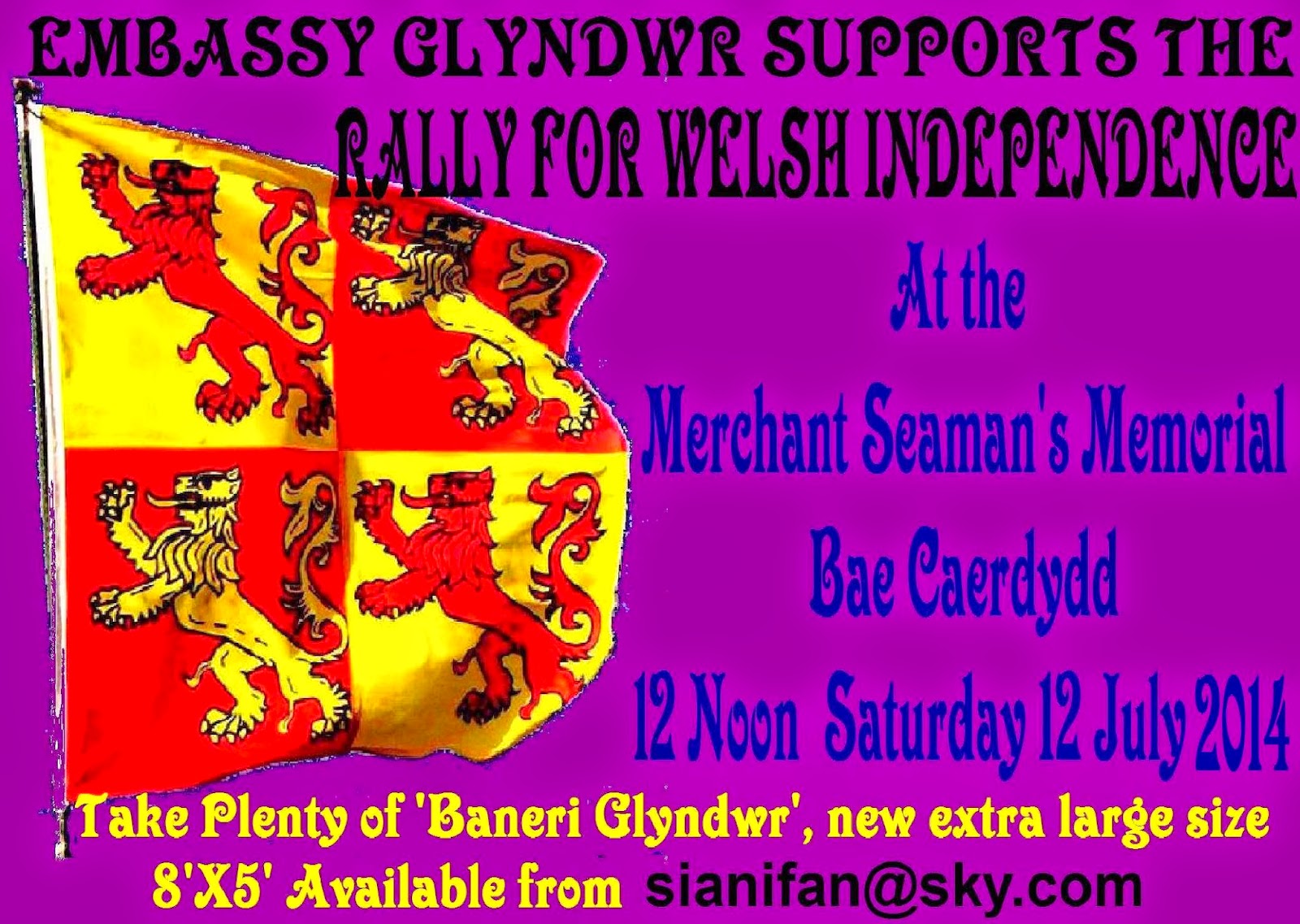