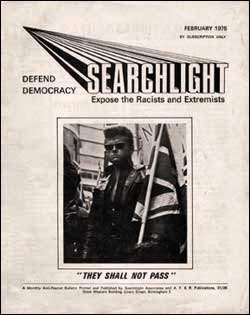 "Searchlight does, sometimes, publish extremely useful information on the fascists. However it is also clear that Searchlight has its own, hidden agenda and it does, by its own admission obtain information from the Secret State ie. MI5/Special Branch, as well as foreign intelligence agencies. It beggars belief that this flow of information is only one way

The conflict between Gerry Gable’s Zionist and anti-fascist politics has Editor of Searchlight has meant support for US imperialism in the Middle East, since Israel relies on the US to fund its wars of aggression and indirectly its settlements. Unsurpringly this came into conflict with the struggles of third world peoples. If there is one thing that the rise of the EDL and Islamaphobia, and before them the BNP, should have taught us it is that you cannot divorce domestic racism from the racism that is consequent upon our colonial and imperial adventures. Those who see ‘Islamic fundamentalism’ as the main problem, whilst ignoring Jewish and Christian fundamentalism (for example the Church of England’s opposition to gay marriage) are playing the racist card. And that is the game that Gable has knowingly played for the last 30 years"

Searchlights attack on the Ukraine Solidarity meeting has to be put in context of Gable's Zionist politics and Israel's support for US Imperialism and the Kiev Putschists."

Democracy and Class Struggle says the source of the above quotations is from Tony Greenstein's excellent Blog http://azvsas.blogspot.co.uk/2012/06/death-agony-of-searchlight-anti-fascist.html and this article should be read in full has it exposes Gerry Gable and Searchlight for those not familiar with its ideology and practices.

Nickglais, Editor of Democracy and Class Struggle used to know Maurice Ludmer one of the founders of Searchlight in Birmingham back in the 1970's and learned much from him, it is a shame what Gerry Gable has done to Searchlight and I am sure Maurice Ludmer would have serious problems with Gerry Gable's pro Imperialist Zionism and his shameful attack on Borotba themselves victims of Ukrainian Fascism and the newly formed Solidarity with the Antifascist Resistance in Ukraine

Yes, Ludmer was an antifascist and an anti imperialist. I knew him to be so. He must be turning in his grave at how Searchlight has developed