Stop the war in Ukraine: a statement by the Left in Russia, Ukraine and Belarus plus critical commentaries 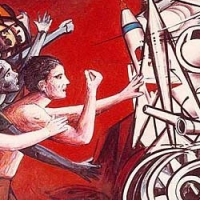 It was designed to strengthen the unity of internationalists three countries in the fight against the violence, and repression of nationalist hysteria on both sides of the front.

Participants of the conference were published below statement on the situation in Ukraine. We invite all leftist democrats and true anti-fascists put his signature:


We, the participants of the organizational meeting of left and marxist groups and organizations from Belarus, Russia, and Ukraine, believe that ceasing a civil war in Ukraine is necessary.

The military conflict that followed the victory of the neo-liberals and nationalists in Kiev "euromaidan" claimed hundreds of lives and contributed to an unprecedented growth of chauvinism and xenophobia in Ukrainian and Russian society.

This war allows the ruling class to consolidate Ukrainian society around their political regime, distracting workers of the Western and Eastern parts of the country from struggle for their social and political rights, and pushing them together in the interests of the bourgeoisie. Russian government, the European Union and the United States use the civil war in Ukraine for the same purpose: dying Donbass people are just pawns of their competition.

We express our solidarity to all participants of the Ukrainian left-wing movements that fight against war, nationalism and xenophobia.

We consider it necessary to provide them all possible information, political and material support.

We oppose the pressure and reprisals by all participants of the conflict, massacres, torture and abductions against Ukrainian leftists, anti-fascists and all Ukrainian citizens, regardless of their political views. We oppose the political persecution in the Crimea as well.

To stop the war is the primary task for all democratic left movements, regardless of differences on various issues of political agenda. So, we we believe it is necessary to coordinate the efforts of all the opponents of the war in Ukraine, forming a massive and influential anti-war movement.


There's a statement being widely shared on Internet at the moment - "Stop the War in Ukraine" - which seems to have emerged from a regional conference of socialists hailing from Russia, Ukraine and Belarus.
It reads as a worthy attempt to call on all sides to disarm and negotiate a comprehensive peace.
The trouble is, it's completely divorced from reality.
Kiev is not about to disband the Ukrainia...n army.
Svoboda is not about to relinquish its control of the military, the justice department, etc.
Pravy Sektor is not about to withdraw from the National Guard.
The USA is not about to give the green light to Kiev to negotiate a federal settlement of the conflict - a settlement that Kiev wouldn't agree to anyway.
And the militias in the east, defending their homes and workplaces against the US backed troops and their paramilitary neo-Nazi allies, really aren't about to stand down.
Nor should they.
As far as I'm concerned, they have the right to defend themselves "by any means necessary".
Our job is to support them.

Shapinov of Borotba on the resolution of the antiwar conference held in Minsk on June 7-8:
Such a declaration would have been nice for a broad anti-war movement, which includes not only the left.

If this is the position of the left, then it is too moderate.Firstly, there are characteristics of the Kiev junta regime having at least some of the key features of fascism, according to the classical definition of Georgi Dimitrov (open terrorist dictatorship in the interests of finance capital, use of power for suppression of political opponents, and a mass reactionary movement).

The Kiev junta is now the chief evil which must be fought against and which should be destroyed.

While the junta there, the world will not - this follows from the nature of the political class and the Kiev junta.

If earlier it was possible to have the illusion that there was a split among the oligarchy, the latest facts, such as full support of the Ahmetov clan for the junta and the actual perfidy of Donetsk big business with the junta against the Donetsk People’s Republic (DNR), leaves no room for these illusions.

All Ukrainian oligarchs as a class are on the side of the junta. This formulation cannot be considered leftist. And this fact does not allow us to keep "neutrality," the spirit that permeated some aspects of the declaration.Secondly, the left should support the self-determination of the people in the Donbass.

This right was actually implemented in referendums in the Donetsk and Lugansk region.

And while the conditions in which the referendums were held may not be ideal, this is not the fault of the DNR and Lugansk People’s Republic (LC), but of the Kiev junta, which strongly prevented the will of citizens from being expressed.

At the same time, this does not necessarily mean unconditional support for the political and military leadership of DNR and LC. Of course, and sadly, given the working class composition of the region region, the left could not lead the anti-oligarchic and anti-fascist movement in its struggle.

Pro-Russian patriots were more organized than the left, so they were head at the head. This is an occasion for self-criticism of the left, and not to criticize the DNR and LC.Thirdly, for the Russian left, of course, it is very politically correct to put Russia in the first place among the intervening parties, but it is a sin against the facts.

In fact, there is almost no support from Russia, except for private initiatives.

Recent actions of the Russian authorities say more about a willingness to surrender the rebels of Donbass, as soon as they throw up some suggestions, such as "partial payment for gas."

Here, probably closer to the truth is Kagarlitskiy, who said that if Russia was truly democratic regime, the Russian tanks would already be near Kiev.

The Russian regime should be criticized not for intervention but for non-interference, bordering on the actual betrayal, which is accompanied by deafening patriotic and anti-fascist propaganda.Fourth, there is the abstract call "to disband armed groups." Which groups?

Everyone, including the Ukrainian army and police?

Disband the people’s militia or recognize it as the legitimate armed force of DNR and LC subordinate to the democratically elected authorities of the Republic, which will be elected after the ceasefire?

I believe that the latter option would provide more freedom and democracy in the Donbass than surrender of the militia, while maintaining the army of the Kiev junta.
Posted by nickglais on 6/11/2014 02:08:00 PM