How England Sacrificed Belgium in 1914 by James Connolly 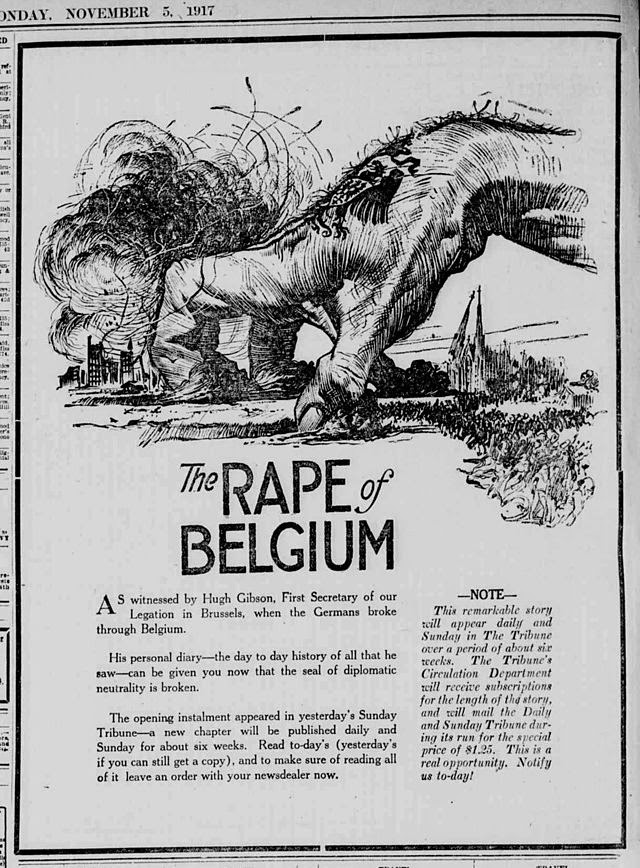 Irish Worker, 17 October 1914.
Recently republished in Red Banner, No.6 (PO Box 6587, Dublin 6).
Transcription: Aindrias Ó Cathasaigh.
HTML Mark-up: Einde O’Callaghan for the Marxists’ Internet Archive.
Proofread by Chris Clayton, August 2007.
It has often been remarked in Irish Nationalist circles that according to the current cant of the Parliamentary Party the interests of Ireland can always be best served out of Ireland.

It is always outside of Ireland that blows must be struck for Ireland, if we are to believe the official ‘leaders of the Irish Race.’
It must surely be upon some such principle of action that England is fighting for the neutrality of Belgium.

According to all the British jingo Press, and still more according to the organs of the Irish Home Rule Imperialists, or Imperialist Home Rulers, Great Britain has entered into this war solely because of her burning zeal for the neutrality of Belgium.

Only because of the danger to Belgian neutrality was the mighty heart of England moved to action, and only because she saw this precious thing in danger did England at last reluctantly draw the sword and enter the lists against the Germans.

And here in Ireland we are tearfully appealed to, to consider the awesome spectacle of the conversion of England to ways of justice and chivalry, and so considering to rush to her aid and side by side with her army battle for the neutrality of Belgium.

But when we look around us all that we see tends to arouse the suspicion that England has simply made a catspaw of Belgium, has deliberately tempted Belgium from her neutrality, and having committed that brave little kingdom to the fight has cold-bloodedly left her towns, cities and territories to be defended by her own unaided efforts.

Whilst howling long and loudly against the violation of the neutrality of Belgium England never sent as much as a corporal’s guard to help to prevent it. Whilst the Belgian soldiers were pouring out their life-blood in torrents in an effort to stem the forces of the invader, whilst the harvest in Belgian fields was trodden under foot, Belgian industries destroyed and the population of Belgium driven from home and country, the armies of England were kept carefully out of Belgium, and that country left to stew in its own juice.

England and France cried out to the world that they were modern paladins of chivalry risking their all to save Belgium whilst all the time they were coolly devoting their every energy to the work of saving their own skins.

All during the first month of Belgium’s martyrdom England poured her Expeditionary Troops into France leaving Belgium to her fate. Belgium asked for troops to help defend her neutrality.

England replied, “We are sorry, we would like to send you some troops, but you see we have a pressing engagement elsewhere. But we will write some nice newspaper articles about you, and even if you do suffer just think how useful your sufferings will be to us in the preparation of speeches against Germany.”

Antwerp in its last agony brings this fact out very clearly.

Even the most thoughtless cannot be but struck by the manner in which the editorials of the English newspapers assure their readers that the sufferings of Antwerp will be another argument against Germany.

They dwell so much upon this aspect of the situation that it is clearly seen that in their eyes the sufferings of the Belgian people count for little – the manner in which their sufferings can be exploited to England’s advantage counts for much.

The English press now admits that before the bombardment commenced the Belgian authorities wished to evacuate the city in order that it might be spared. But the English insisted that Antwerp must fight on although, as they now admit, they were well aware that the forts would be powerless to hold out long enough to be relieved, and that the resistance would mean the destruction of the city.

A Naval Brigade of raw, untrained units was sent into Antwerp to deceive the people with the hope of British assistance, and the Belgian people were driven on by England to the needless sacrifice of another city in order to provide another ‘horrible example’ for the unctuous hypocrites of the British press to shed tears of ink over.

Now that Antwerp has fallen all the professional liars of the capitalist press assure us that it is of no importance to the Germans.

By such a statement they only further prove the truth of what I have just written. They illustrate the cold-blooded determination of England to sacrifice Belgium, all Belgium, to save the precious skins of the Allies.

If Antwerp is of no importance to Germany, then all the greater is the crime of those who forced the Belgians to resist the bombardment when they desired to evacuate the city.

If Belgium had contented herself with protesting at the passage of German troops through her territory she would now have all her fortresses and cities in her own hands, her soldiers would all be alive and in a position to act with effect when the war had exhausted both sides, none of her civilian population would have lost their lives, homes or domestic treasures, or be scattered as exiles on the charity of strangers, her foreign trade would not be lost by the paralysis of her domestic industry, and her neutrality and independence would be effectually maintained.

If in the fluctuations of the war the soil of Belgium became the scene of conflict both sides would have in their own interests kept aloof from any considerable town or city in the possession of large bodies of fresh Belgian troops, and would have avoided anything calculated to make fresh enemies for their own side.

Under such circumstances any conflict that would have taken place in Belgium between the Germans and the Allies would have been fought out in the open country, or around small villages whose inhabitants could easily have been sheltered in the large towns, and all the horrors to which Belgium has been subjected would have been unknown.

For all those horrors she has to thank her stupid governing class, and the wily, heartless English diplomacy that sacrifices Belgium in a quarrel not her own.

Will Ireland allow her sons to be sacrificed by the same unscrupulous power that English capitalism may rise by garrotting the civilisation and commerce of Europe? No, a thousand times no!

Mr Redmond’s Volunteers – the unpaid soldiers of England, scabbing on the British Army, doing for nothing what British soldiers require pay for doing – they may go though we doubt it, but no man to whom Ireland and Ireland’s interests are dear will ever draw a sword or fire a shot in any quarrel of England’s making until such time as such quarrel finds its venue in Ireland, is fought out on Ireland’s own soil.

And when that day comes the swords will be drawn and the shots fired by Irishmen for Ireland, and for Freedom for all who work and live in Ireland.

Democracy and Class Struggle will be publishing more on the First World War and Imperialism to confront the new First World War Propaganda promoted by Max Hastings writer for the Daily Mail and the Financial Times, the British establishment historian.