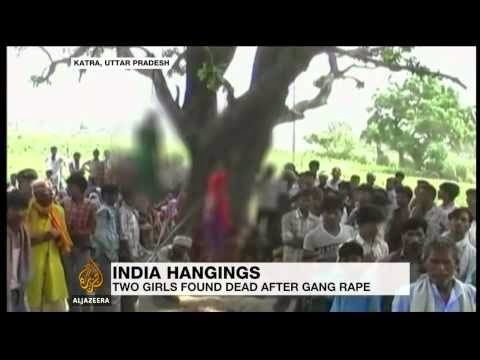 Organised by Freedom Without Fear Platform
Please come and support this important protest.  On 28 May, two teenage girls were brutally gang raped and lynched by higher class landowners in Uttar Pradesh, India. Hundreds of villagers, including many women and girls, held a sit in under the tree where the bodies were found to press authorities to arrest the suspects -- some are police officers.
The local chief of police had ignored the father’s report of the girls’ abduction for over twelve hours.  Had police acted sooner, the girls might still be alive.

The village protesters’ determination to get justice resulted in the police finally arresting three of the suspects and two police officers for shielding the perpetrators. The search continues for the other men suspected of being involved.
Women of Colour GWs is going to the London protest to show international support for the victims’ families, Dalit women and their communities.  Please come and circulate the call widely in your network

"The recent election victory of Narendra Modi and the BJP has further emboldened upper caste and economically powerful rapists. The Brahmanical-patriarchal ideas of the Hindu right, in which Dalit women’s lives have no value, are being combined with intensified neoliberal economic policies which leave Dalits and other exploited and marginalised people even more vulnerable.

While Modi tried to reach out to Dalits in his election campaign, his close ally Baba Ramdev’s offensive remarks about Dalit women as the sexual property of upper castes exposed once again the misogynistic casteism of the Hindu right.

In the wake of the Badaun case, Modi has condemned the appalling levels of gender violence in opposition-ruled UP, but the fact that he has given a Ministerial post in his government to Sanjeev Baliyan, one of the main accused in the Muzaffarnagar communal violence in UP last year which involved mass rapes of Muslim women, sends out a very different signal".
Posted by nickglais on 6/02/2014 12:33:00 PM