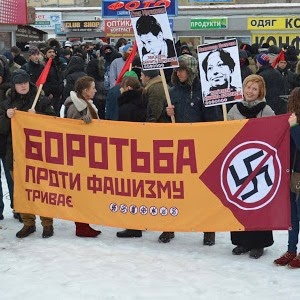 Borotba - Ukraine
Democracy and Class Struggle is concerned at the co-ordinated attacks on Borotba and  deliberate misinformation orchestrated from Kiev by disgraceful Maidan Leftists of which the latest statement from Searchlight is a recent example.
We respectfully suggest Searchlight's attention to be drawn to the real frauds on the Left in Ukraine like Zakhar Popovych and Ilya Budraitskis .

It is very sad to see that Gerry Gable, editor of the antifascist magazine Searchlight, has written an ill-informed and incoherent attack (Warning to antifascists invited to meeting in SOAS) on the newly formed campaign Solidarity with the Antifascist Resistance in Ukraine, which was founded last night at a meeting of more than 150 people in London.

Gerry’s article makes three points, and none of them has the slightest credibility.

The first is that the Russian television station RT gives a platform to fascists. This is irrelevant. We are not sponsored by or funded by RT in any way. Nor does he give any evidence that we are.

The second is that RT journalists have links to shadowy groups such as the Lyndon LaRouche cult, and that someone in Donetsk also has such links, and that the Ukrainian socialist group Borotba who addressed our launch meeting support the struggle in Donetsk.

This implication that we are connected to a universally despised cult is a transparent attempt at guilt by association. But the association is nil and Gerry gives no evidence of any.

All attentive readers will reject this as a baseless smear.

Furthermore, while Borotba issued a balanced statement on the formation of the Donetsk and Lugansk Peoples’ Republics, it then went on to criticise the conservative turn represented by the Constitution which was published.

The attack against Borotba includes one point which requires further clarification. Gerry’s unnamed sources alleges that: “Borotba is a fake left-wing organisation the representatives of which are now travelling across Europe to get funding for their dodgy activities.”

Getting funding from left wing organisations for “dodgy activities” is a serious charge and we ask Gerry and his unnamed source to please provide some evidence for that, or else retract the allegation.

In all our dealings with Borotba, in gathering information and providing solidarity for their comrades, one of whom was killed at the Odessa Trade Union building, some of whom suffered an attempted kidnap by paramilitary fascist thugs in Kharkov, etc., they have never requested any funding from us for their activities, dodgy or otherwise.

Gerry’s third ‘point’ is a mere republication of comments by an unnamed source who is, we are told, “one of the most experienced investigators of what really goes on in Moscow and Kiev.” We wonder who this person is?

His investigative skills are in question because his information amounts to no more than republication of a recent attack on the socialist Borotba Union of Ukraine by the six-strong Kiev group that publish ‘autonomia.net’. Their libel against Borotba has been comprehensively answered:
http://borotba.orgstatement_of_the_union_borotba_over_recent_smear_campaign_against_anti-fascists_in_ukraine.html/

Finally, we have to report that Gerry never approached us for our comments, never asked us if the allegations were true, never sought our opinions. He could have contacted me, or Lindsey German of Stop the War, or Andrew Murray of the Communist Party, and put these allegations to us. He did not.

Instead he swallowed them whole, and then accused us of being ‘enemies of the anti-fascist struggle’ and ‘political crooks’.

No one can take any pleasure in concluding that Gerry Gable’s investigative methods are deeply flawed, his approach biased, and his treatment of sources credulous in the extreme.

Antifascists should reject this as an outrageous smear campaign against Solidarity with the Antifascist Resistance in Ukraine.

Solidarity with the Antifascist Resistance in Ukraine 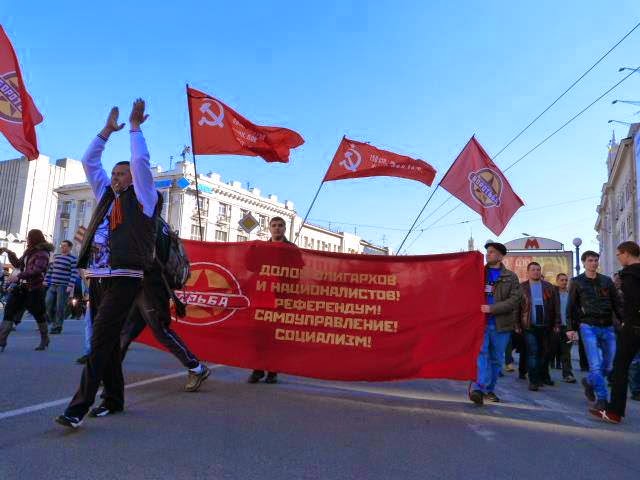 Searchlight does, sometimes, publish extremely useful information on the fascists. However it is also clear that Searchlight has its own, hidden agenda and it does, by its own admission obtain information from the Secret State ie. MI5/Special Branch, as well as foreign intelligence agencies. It beggars belief that this flow of information is only one way

The conflict between Gable’s Zionist and anti-fascist politics meant support for US imperialism in the Middle East, since Israel relies on the US to fund its wars of aggression and indirectly its settlements. Unsurpringly this came into conflict with the struggles of third world peoples. If there is one thing that the rise of the EDL and Islamaphobia, and before them the BNP, should have taught us it is that you cannot divorce domestic racism from the racism that is consequent upon our colonial and imperial adventures. Those who see ‘Islamic fundamentalism’ as the main problem, whilst ignoring Jewish and Christian fundamentalism (for example the Church of England’s opposition to gay marriage) are playing the racist card. And that is the game that Gable has knowingly played for the last 30 years.