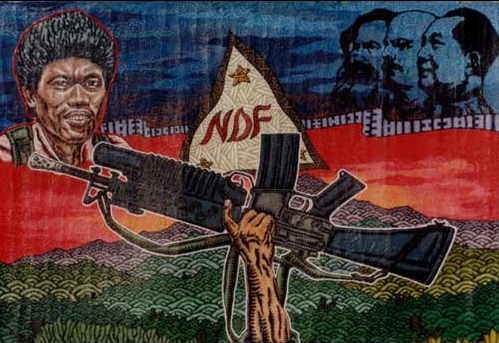 The Communist Party of the Philippines (CPP) today condemned the US military for intervening in the Armed Forces of the Philippines' siege of several coastal towns of Zamboanga City against the Moro National Liberation Front (MNLF) from September to October last year. “The involvement of US military forces, whether through direct combat or providing logistical or intelligence support, constitutes military intervenionism and is a violation of Philippine national sovereignty.”

In remarks made yesterday, US ambassador Philip Goldberg admitted that US military forces were involved in the military operations against the MNLF in Zamboanga City last year, claiming to have provided “vital information and communication assets” to the AFP.

Goldberg issued this statement during the turnover of command of the US Joint Special Operations Task Force-Philippines (JSOTFP) in Zamboanga City yesterday. Outgoing JSOTFP commander Col. Robert McDowell also admitted to having taken part in the siege and considered himself “a silent hero”.

The Aquino government and its military officials have consistently denied US involvement in the month-long siege launched by the AFP against the MNLF. However, news reports at the height of the all-out siege by the AFP clearly showed unmarked aircraft hovering and circling over the site for several hours. Even then, speculation was rife that the unidentified aircraft were drones being operated by the US forces from its base in Camp Navarro in Zamboanga City.

The all-out war of destruction practically levelled the city’s sprawling residential area. The aerial bombing, mortar shelling and machine-gun strafing of homes and buildings displaced 120,000 people who were later prevented from returning to their homes and forced to live in subhuman temporary shelters. Since October, more than 100 people have died of illnesses in the evacuation centers. There is widespread belief that the Aquino regime made use of the MNLF presence in the area to launch an all-out war of destruction to pave the way for plans to use the residential area for commericial and military purposes.

“The Aquino regime and the AFP must be held responsible for having allowed or invited US military interventionism in carrying out its all-out siege and war of destruction in the coastal towns of Rio Hondo, Sta. Barbara and Sta. Catalina,” said the CPP. “In allowing the US military to interfere in Philippine internal affairs, the Aquino regime is paving the way for US interventionism on a larger scale in the future.”

“Even now, the US military has been carrying out all-out surveillance using drones as well as tapping into the telecommunications and internet infrastructure in the Philippines. It has even monitored the cellphone communications of key politicians of the Aquino government,” pointed out the CPP.