Ukraine : Battle of the Peacekeepers by Victor Shapinov of Borotba 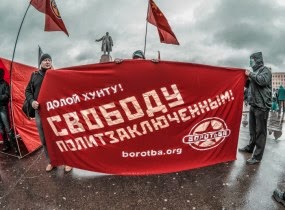 Nobody believes in the ceasefire. Except maybe Vladimir Putin, who has asked the Federation Council to reverse its decision on the possibility of using the Russian army on the territory of Ukraine.

Of course, supporters of the Russian authorities will see in the president's actions the next "trick," like they previously announced about his enthusiastic handshake with Poroshenko or statement to the Kiev authorities about the possibility of partial payment for gas. But it seems to me that if the Russian leader believes in the possibility of peace, he is seriously mistaken.

However, the resumption of hostilities speaks for itself. In fact, the terms proposed by Poroshenko do not suit anyone.

The Donetsk and Lugansk People’s Republics are naturally glad to have a truce, but it is too soon to say what the prospects are for long-term peace. Poroshenko’s “peace plan” does not satisfy the republics because no public recognition is given to them, and even their rights under a single federal entity of Ukraine are not promised. Kiev is discussing the terms of surrender, rather than a democratic peace that takes into account the interests of all parties.

The Ukrainian hawks, the so-called “war party,” are not satisfied with Poroshenko’s "peace plan” either. This "party" of [oligarch and Dnepropetrovsk Governor Igor] Kolomoysky, under the guise of the war, is building its own “federation,” a sort of corporate state, to control not only Dnepropetrovsk, but the Odessa region and the city of Kharkov. Kolomoysky, by the way, has already begun to conduct his own foreign policy, meeting with U.S. envoy Victoria Nuland separately from the Kiev leadership in Odessa.

Also in the "war party" are all those who are profiting from this war -- from generals to the same Kolomoysky, who is selling the army and fascists fuel and materials at exorbitant prices. And of course, the "war party" includes all those "heroes" of the anti-terrorist operation, who, instead of prison terms for Nazi propaganda, lawlessness, looting, murder and torture, received weapons and official recognition as various "battalions." The external patron of the "war party" is the U.S. administration, which relies on a strategy of "organized chaos,” which they also used in the Middle East.

And finally, those areas of the South-East not officially covered by the war are not satisfied with peace on Poroshenko’s terms. These areas are under actual occupation by all sorts of nationalist paramilitary forces which are willing to suppress any manifestation of discontent. An appendage of this is the growing repression against the political opposition.

In Odessa and Kharkov alone, dozens of political prisoners have been arrested, and that's not counting the dozens of AntiMaidan activists killed by Nazi militants. In these areas, the Gauleiters appointed from Kiev, and even directly by Kolomoysky have certainly not solved any of the social, political or language problems which pushed the inhabitants of the South-East to rebel. But so far, outside of Donbass, the uprising is unarmed.

So we return to the starting point. The only chance for peace is federalization and broad self-government, at least for the south-eastern regions. Only this can somehow "make peace.” But Poroshenko himself will not be satisfied: in this case he will be forced to actually carry out the initial demands of the AntiMayadan -- that is, the demands of his political and military opponents. And it would mean his defeat.

Poroshenko, perhaps, could be reconciled to defeat. But the Frankenstein monster spawned by the Maidan will never agree to this. The Nazi battalions that suffered humiliating defeat by the rebels of the South-East, returning to Kiev, are already looking for those who "stuck the knife in the army’s back." Angry little Führers will stigmatize as "traitors" those who were not able to "finish" the "separatists" and "saboteurs.” Such voices are already heard.

Thus, the nationalist and militarist hysteria fanned by the Kiev authorities will turn against itself.

Is Poroshenko ready for such a turn? Apparently not.

Therefore, blood will continue to flow, and the conflict is likely to be protracted. War stems from the very socio-political nature of the new Kiev authorities. It lives by war, its “peace” is murderous. If we do not realize this truth, we could be deceived for a long time by "peace plans" and other well-made speeches from Kiev under the sound of bombs exploding and volleys of artillery.

We all understand that a bad peace is better than a good quarrel. But we also need to understand that peace throughout the southeast -- including those areas where the war is "one way" in the form of repression and massacres -- will only be possible after the defeat of the right-wing junta in Kiev.
Posted by nickglais on 6/28/2014 02:02:00 PM