Revolt on the Right: Explaining Support for the Radical Right in Britain, by Robert Ford and Matthew J. Goodwin 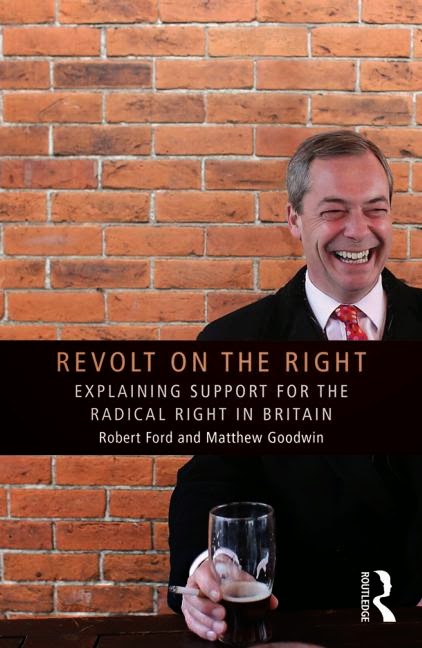 A study of Ukip’s rise yields surprising facts about the party’s followers, says Daphne Halikiopoulou.
Published on the eve of the European Union elections, Revolt on the Right is a highly topical account of what the authors term “one of the most successful challenges to the established political parties in modern Britain”.

Robert Ford and Matthew Goodwin follow the UK Independence Party from its establishment in “the dusty office” of a London School of Economics history lecturer to its current status as the “most significant new British political party in a generation” under the leadership of Nigel Farage. Their most important findings concern the nature of the party’s voting base.

In short, Ukip supporters are not who we think they are.

They are neither single-issue anti-EU voters nor middle-aged, middle-class Tories suspicious of David Cameron’s policies.

Rather, Ukip’s support base is predominantly working class – in fact, the most working-class base for a major party since Michael Foot’s Labour.

Drawing on an impressive pool of survey data, the authors show that those most likely to vote Ukip are angry old white men: the older, less skilled, less educated working-class voters who have been “written out of the political debate”.

These voters attach a broader meaning to their dislike of the EU, linking it to concerns about immigration, access to welfare, Britain’s sovereignty and future, and dissatisfaction with mainstream parties.

These groups had initially turned their backs on politics, but Ukip has offered them an outlet and a voice for their concerns.

This finding is significant. Ford and Goodwin argue that because Ukip’s support is predominantly working class, it poses a significant threat to Labour, not just the Tories as has been assumed.

Curbing its support is not simply a question of the Tories pushing for stricter immigration policies and a stronger anti-EU stance.

The party’s rise is largely attributable to its ability to push a “value divide” to the forefront of the political agenda.

Yet why should the finding that Ukip’s support base includes predominantly older working-class white men necessarily entail a big threat to Labour?

After all, there has always been a sizeable proportion of the working class that voted for parties other than Labour.

These voters could simply be part of the Tory working-class base, swing voters or voters who abstain altogether, all part of a pool on which Labour support does not necessarily depend.

And if this is true, how does it compare with support for the radical Right across Europe? While many such European parties make a similar “value divide” pitch, in some cases the support base differs fundamentally. For example, in contrast to Ukip’s angry old white men – and even the BNP’s angry young white men – supporters of Golden Dawn in Greece come from many different educational, professional, age and class backgrounds.

If Ford and Goodwin are correct – if Ukip’s rise isn’t just about annoyed Tories but about deeply disenfranchised, “left behind”, working-class groups – then Labour will find itself in a precarious situation in coming elections.

Even more importantly, the cultural divide will play a fundamental role in reconfiguring partisan alignments, and Ukip may be here to stay. Yet the main test for the party will not necessarily be its performance during the second-order EU elections, but rather the 2015 national elections and beyond.

Don’t think of Ukip as just a party; think of them as a symptom of far deeper social and value divisions in Britain. Farage is winning over working-class, white male voters because they feel left behind by Britain’s rapid economic and social transformation and left out of our political conversation; struggling people who feel like strangers in a society whose ruling elites do not talk like them or value the things which matter to them.

This should ring loud alarm bells on the left. In a time of falling incomes, rising inequality and spending cuts, such voters should be lining up behind the party that traditionally stood for social protection and redistribution. Instead, they are switching their loyalty to a right-wing party headed by a stockbroker and staffed by activists who worship Thatcher. Those who are getting hit hardest by the crisis and austerity are turning not to Labour, but to Farage for solutions.

One reason for this is that for those left behind, politics is no longer about economics. These voters are not backing Ukip because of their economic concerns; they are backing the party because they see Farage as representing an identity and set of values they cherish but do not see expressed anywhere else. These voters have been left behind not just by wider trends, but the rise to dominance of a university-educated, professional middle-class elite whose priorities and outlook now define the mainstream.

The dramatic nature of this shift is often missed because it has been accomplished over decades. Yet in only 50 years Britain has gone from a society where working-class voters with little education decided elections to one where such voters are now only spectators, and the crucial and decisive battle is fought between middle-class graduate candidates seeking middle-class graduate votes. When Harold Wilson was elected in 1964, working-class voters outnumbered professional middle-class voters two to one; by 2010 the professional middle classes had a four to three advantage.

Both Tony Blair and Cameron have sought to revive their party’s prospects by appealing to the rising middle classes. Neither has shown much interest in the struggling, left-behind voters, and since 1997 these voters have made their feelings about being marginalised clear: turnout from these groups has collapsed, and dissatisfaction with politics has increased. Ukip’s deputy leader, Paul Nuttall, captured this sense of exclusion in a 2013 speech: “In the days of Clement Attlee, Labour MPs came from the mills, the mines and the factories. The Labour MPs today go to private school, to Oxbridge, [then] they get a job in an MP’s office.”

These changes have been accompanied by a major transformation in the values that dominate the country. Across Europe it is no coincidence that radical right parties similar to Ukip win support from the same working-class voters, and accomplish this by targeting the same issues: national identity; immigration; Europe; and resentment of political and social elites. This is because there is now a deep and growing divide in the values of the left-behind and the professional middle-class mainstream.


Democracy and Class Struggle welcomes this study even if we do not agree with all its conclusions, it is the most detailed survey of UKIP voters and should be studied by all on the Left to understand UKIP and what propels it, and how it can effectively be combated.