UPDATE - Maria Matyushenko has been released

We have just received news that unknown people ransacked the apartment of Maria Matyushenko, a member of Borotba, and took her.

This was reported by one of her comrades on Facebook.

“The apartment of our activist from Dnepropetrovsk Maria Matyushenko was raided. Unknown people (according to preliminary information from the SBU security service) ransacked her home and took her.”

Remember that the Kiev government are conducting a clamp down on anti-government protesters and their democratic rights. The Marxist organisation Borotba (Struggle), suffered a series of illegal raids on its offices in Kiev, Kharkov and Odessa and was finally forced to go underground.

On May 20th there was another attempt to kidnap leading Borotba activists by armed paramilitary thugs at the end of an anti-government rally in Kharkov.

The government has started a clampdown on facebook, with the state prosecutor instructed to start criminal charges against anyone making “public calls for the violent change or overthrow of the constitutional order” or even “the distribution of materials inciting to such acts”

We urge left wing, trade union and solidarity activists to contact the Ukrainian embassies and consulates demanding that Maria Matyushenko is immediately released and making the Ukrainian authorities responsible for her well being. 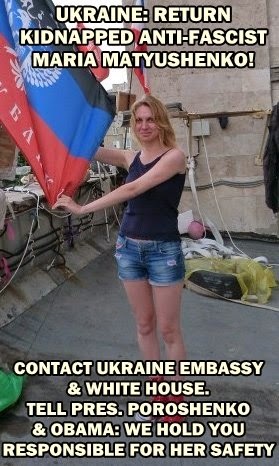