Why is international media ignoring current protests in Bulgaria by Petya K. Grady ?


Bulgarians have been out on the streets for a week by the thousands but with very few exceptions, international media outlets have chosen not to cover the protests.
On the surface, the decision makes sense. People in Sofia took to the streets a week ago today after Delyan Peevski – a well known oligarch, media mogul and politician – was appointed chief of Bulgaria’s State Agency for National Security. The appointment was rushed through and before anybody even knew he was up for the position, Peevski was already giving interviews and sharing his vision for the office. Bulgarians wouldn’t have it. Organizing on Facebook and Twitter, people took to the streets and within 24 hours of the first protest, Prime Minister Oresharski had already retracted the appointment.
Why cover a protest that seems to be directed at a very specific person, who was appointed to a very specific position and, especially, after the appointment has already been retracted? This is not news. For a Western audience, the story was over before it even started.
Even though the protests were prompted by a very specific event, not much unlike the Taksim protests, they are really not about this one particular incident. They are about something so much bigger and so much more disturbing than that, that frankly, failing to cover it seems irresponsible at best… and, to an Eastern European, who is so used to questioning media objectivity in the first place,… it appears almost criminal. Who is telling YOU to keep YOUR mouth shut?!
With well documented ties to criminal businessmen and their political cronies, Peevski’s inexplicably easy ascend to power has come to epitomize a mode of governance in which political, economic and oftentimes criminal interest have developed such a symbiotic relationship, that both politicians and citizenry are unable to distinguish where one point of interest starts and another one begins.
Corruption is not a uniquely Bulgarian attribute but what is especially noteworthy about what’s happening in Bulgaria is how out of touch our political class has become as a result of it. Political and criminal interests have been so entangled and for so long that the people who are charged with running the country have a completely thwarted conception of what it means to govern.What Peevski appointment showcased so perfectly is that they are no longer capable of discerning which of their activities actually break the law. They have become so untouchable and so oblivious that they have started getting sloppy.
People are out on the streets not because some thug got too ambitious. People are out because their country is being taken away from them.
That’s worth writing about. 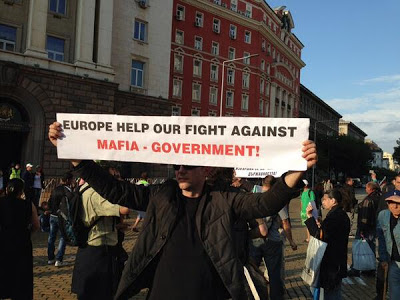