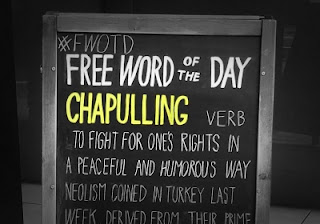 Feride Aksu Tanik, of the Turkish Doctors Union, said it had called its work stoppage “to protest against the police force that attacks children, youngsters and everyone violently, and to the detentions of doctors who provide voluntary services to the injured.”

Turkey’s doctors association said Monday that four people, including a police officer, had died in violence linked to the crackdown, and an investigation was on going into the death of a fifth person who was exposed to tear gas. More than 7,800 people have been injured; six remained in critical condition and 11 people lost their eyesight.

The tough tactics used by the government to disperse protesters during the past two weeks have drawn international criticism.

Overnight, for hours, a lone man stood silently on Taksim Square, eventually joined by about 20 other people who did likewise before police escorted them away. The group put up no resistance.

Pockets of unrest erupted elsewhere in Istanbul, with police resorting to water cannon and tear gas at times.

The labor yesterday rallies had a more structured feel than the counterculture-style sit-in at Gezi Park’s tent city, and the work stoppage involved many professionals who make up a liberal, urban class that mostly backs the anti-Erdogan protesters.

Chapulling (Turkish: çapuling) is a neologism originating in the 2013 protests in Turkey, coined from Prime Minister Erdoğan's use of the term çapulcu (roughly translated to "looters"[1]) to describe the protestors. Pronounced /t͡ʃapuɫd͡ʒu/[2] in Turkish, çapulcu was rapidly reappropriated by the protestors, both in its original form and as the anglicized chapuller and additionally verbified chapulling, given the meaning of "fighting for your rights".[1] Chapulling has been used in Turkish both in its English form and in the hybrid word form çapuling.

The word quickly caught on, adopted by the demonstrators and online activists, and became a viral video.[3] Many took the concept further by integrating the unique nature of the demonstrations and defined it as "to act towards taking the democracy of a nation to the next step by reminding governments of their reason for existence in a peaceful and humorous manner." [4] Variations of chapulling were also coined for other languages.[5]