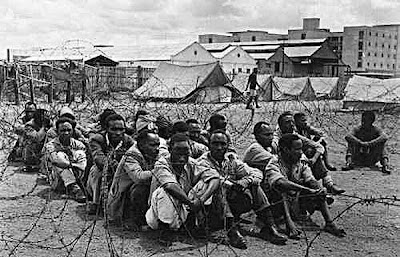 Editorial, Jamaica Observer, Friday, June 07, 2013
England’s expression yesterday of sincere regret and offer of compensation for the acts of torture that a British colonial government carried out against Kenyans fighting for liberation from colonial rule in the 1950s and 1960s, will, we expect, revive the reparations debate in the Caribbean.


As reported on page 29 of today’s Jamaica Observer, the simultaneous announcement in Nairobi and London sparked celebration in the Kenyan capital. Elderly Kenyans clapped and sang joyful songs of struggle during a near two-hour press conference attended by Mr Christian Turner, the British high commissioner to Kenya.


In London, Foreign Secretary William Hague told the House of Commons that his Government accepted that Kenyans were subjected to torture and other ill treatment.


However, what we found most significant was that Britain’s Foreign and Commonwealth Office insisted that an “expression of deep regret” was not the same thing as an apology.


Wire service reports tell us that the compensation will see approximately US$21.5 million being paid to the 5,200 Kenyans who were found to have been tortured, or about US$4,100 per Kenyan victim. Another US$9.25 million will be used to pay costs to the Kenyans’ legal team.

Quite frankly, the payouts are low, and the British Government, we are told, has made it clear that it “doesn’t accept liability for the actions of previous colonial governments”.


That, we believe, is the position that England, and any other country that profited from the slave trade, will adopt in the case being made for reparations.


As we have pointed out in this space before, reparations is a most emotive issue that has generated positions that are poles apart.


Advocates argue that the enslavement of Africans for 400 years was the greatest crime against humanity for which the countries that benefited should pay compensation. Those opposed to that argument say we should forget the past and move on; with some even describing the reparations lobby as a form of mendicancy intent on bilking developed countries out of billions of dollars.


The debate, as we said, has never been short of passion, but the issue needs to be settled because it will continue to fuel rage each time it is raised.


In the Kenya case, we get the impression that, among the victims, the monetary compensation was secondary to Britain’s acknowledgement that grave wrongs were committed.


Mr Francis Mutisi, assistant secretary general of the Mau Mau War Veterans Association, was reported as saying: “We are so happy today, because the truth will be told worldwide.”


Mr Mutisi’s reaction is understandable, given that during the period of the struggle, international attention was focused on 32 murdered white settlers, while at least 90,000 Kenyans were killed and 160,000 were jailed in camps, according to figures provided by Kenya’s Human Rights Commission.


We agree that no amount of money can compensate for the lives lost. However, we can’t help but admire the following view voiced by Mr Gitu wa Kahengeri, a Mau Mau veteran: “The British Government accepted that something bad happened, and this is what the veterans in this group have been seeking.”

Caribbean nations which ignore the human and civil rights of the citizenry will never be able to access reparations. Visiting Barbados economic historian Hilary Beckles, campus principal of Cave Hill and Pro Vice Chancellor of UWI, made this comment at a public lecture and launch of his book Britain’s Black Debt at Daaga Auditorium, St Augustine Campus, on May 23. Among those present were St Augustine campus principal Prof Clement Sankat, Prof Funso Aiyejina, dean of the Faculty of Humanities and Education, literary icon Earl Lovelace and head of the department of history Dr Heather Cateau.

Beckles dedicated his book to the late eminent historian and T&T’s first prime minister Dr Eric Williams, author of the seminal work Capitalism and Slavery. Beckles said his book should be seen as a sequel to Williams’ work and dedicated it to him.

His narrative revolved around a cover photograph of a young queen Elizabeth of England taking a stroll with her cousin, the 7th Earl of Harewood on his sugar plantation (the Belle) in Barbados in 1966. It was bought by the earl’s ancestor in 1780 and there were 232 slaves.

Before delving into the post pan-African conversation, Beckles said he had to “purge himself” by writing this book which he deemed to be a case study of the need for reparations for the descendants of enslaved peoples.

He felt Britain had a case to answer, which the Caribbean should litigate. Beckles said he believed there would be no social justice until the matter of reparations was addressed.

“Reparations, or the concept of repairing damage, is based on the search for a higher level of humanity and is intended to lay the foundation for healing the human family. I believe if Williams were alive he, too, would have argued the case for reparations,” said Beckles.

But he sounded a warning bell. Beckles said, “All across the world what we do know is weak nations and weak peoples and disorganised communities never receive reparations. If you take 100 random cases of reparations in the last 50 years, not one has been paid to a nation that is disorganised and is weak and furthermore that does not recognise the human and civil rights of its citizens. Nations only engage in reparatory discussions when they have reached a stage where they are concerned about the human and civil rights of their citizens. In the Caribbean, we have not yet reached that level.”

Beckles cited the shining examples of Korea and the Maldives of New Zealand. “I was in Korea about five years ago and I listened. The Japanese had made criminal use of Korean women. They were taken out of villages and used as sex slaves in the army camps. That matter has been repaired and they have put millions of yen into the Korean Workers’ Development Fund to repair the damage done to women of Korea. The Maldives of New Zealand have received reparations from the British government because the government said the genocide must be addressed.”

But Beckles said there was a lot of work to be done since European governments had consistently refused to give apologies. “Europeans first have to acknowledge a crime has been committed. Most of the countries have not admitted slavery was a crime against humanity. You have to admit responsibility and admit to the damage,” said Beckles.
Posted by nickglais on 6/13/2013 03:15:00 AM