International and British Trade Unions demonstate outside Turkish Embassy in London against State Repression in Turkey. 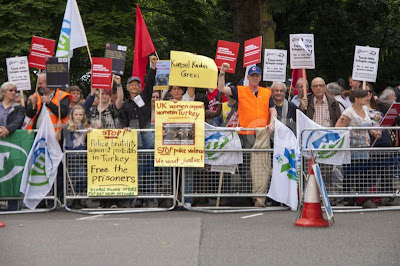 The ITF (International Transport Workers’ Federation), IUF (International Union of Food workers), the TUC and UK unions joined forces with the Taksim Solidarity Committee to demonstrate outside the Turkish Embassy in London  on 21st June 2013 as part of a global two days of action against the continuing repression of protestors in Taksim Square in Istanbul and other centres in Turkey.

It came as no surprise when a delegation led by TUC general secretary Frances O’Grady was refused admission to the Embassy to hand in a letter of protest.

Democracy and Class Struggle offers a Poem of Rememberance for those who died in Turkey in the protests.

"Those who died,
died in fight;
were buried to the sun.
We have no time to mourn for them!

... There is a raid
a raid to the sun!
We will conquer the sun
seizure is imminent!