The Filipino peoples' struggle against imperialist domination and repression : Contribution to the Irish Anti-imperialist Forum 2013 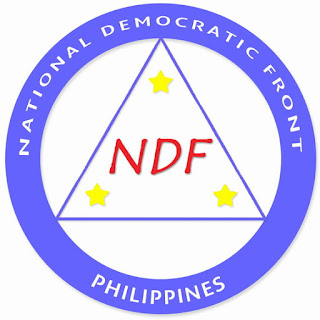 Contribution to the Irish Anti-imperialist Forum 2013

The National Democratic Front of the Philippines wishes to thank the Republican Sinn Fein for this invitation to participate in the Irish Anti-Imperialist Forum of 2013, and to join activities countering the G-8 Summit now being held in Fermanagh, in British-Occupied Ireland.

We are grateful for this opportunity to share with you the situation in the Philippines, specifically the social and environmental destruction being wrought by imperialism, and the revolutionary struggle of the Filipino people for genuine national independence and democracy.

We would also like to take this opportunity to express our condolences to the family, comrades and friends of Ruairí Ó Brádaigh, former Chief of Staff of the Irish Republican Army and President of the Republican Sinn Fein, who passed away on 5 June.

He dedicated his life to the Irish Republican Movement, both as a soldier and political leader, setting the highest standards of commitment, duty, honor and loyalty to the cause of Irish freedom. Filipino revolutionaries salute the legacy that he has passed on to the next generations of Republicans who continue the fight for Irish national independence and genuine democracy.


US imperialism in the Philippines

It is highly appropriate to hold public activities simultaneous with the G-8 Summit here in Ireland. It gives peoples around the world an excellent opportunity to focus our collective indignation at the destruction and penury caused by the most powerful imperialist states in the world.

Member-countries of the G-8 comprise about 14% of the world's population, but they represent up to 60% of the global gross domestic product. Monopoly corporations based in these countries operate around the world, plundering the natural environment, exploiting wage labor for their super profits and dispatching armed repression against protesting peoples.

G-8 governments are the biggest military spenders, and they control almost all the nuclear weapons in the world. These governments have no qualms about using their military might against other countries asserting national independence, nor in supporting repressive puppet regimes in Asia, the Middle East, Africa and Latin America.

The Philippines has been suffering from US imperialist domination since the turn of the 20th century. Taking over from Spanish colonialism, the US launched an interventionist war in 1899 against the sovereign Filipino people. The brutality of the foreign aggressors resulted in the death of 20,000 Filipino combatants and an additional 1.5 million civilians.

The US has since kept its grip on the Philippines, governing first as a colonial overlord until 1946, and thereafter through a series of local puppet governments. The country is kept as a backward agricultural and non-industrial economy – as a source of mineral and natural resources, plantation products, semi-manufactured commodities, and cheap labor force.

The Philippines also serves, then as now, as a launching pad for military aggression in Asia-Pacific, Indian Ocean and the Middle East. The Philippines is an archipelago in southeast Asia composed of more than 7,000 islands.

It has a land area of 300,000 square kilometers, roughly the same size as Italy and New Zealand, and currently has a population of about 100 million. The country has rich mineral, forest, agricultural, water and marine resources. Despite these bountiful natural riches however, the vast majority of the population live in poverty.

US imperialism and the local ruling classes of landlords and compradors big bourgeoisie have kept the country in a predominantly feudal state. Majority of the population are peasant-farmers, and more than 70% of them are landless share-croppers. They pay feudal rent to the landlords, sometimes amounting up to 70% of the harvest. There is virtually no amount of mechanization in agriculture, most peasants still use water buffaloes and hand tools for cultivating and harvesting their crops. Peasants and agricultural workers also suffer from feudal slavery, usury, low farm wages, and low prices for their agricultural products.

Less than 15% of the population work in the industrial sector as wage laborers. Among others, they are engaged in extraction of natural resources, agriculture, assembly and semi-manufacture of electronics, garments, transport equipment, and food products. In the last decade, call center operations of foreign companies have expanded into the country, reportedly employing 700,000 workers, or about 2% of the country's current labor force.

Foreign monopoly corporations continually plunder the country's natural resources. They reap super profits from these extractive operations while paying virtually nothing to the government. On the other hand, these result in irreparable destruction to the environment and the depletion of resources for the country's own industrial needs.

The local ruling classes of landlords and compradors big bourgeoisie are extremely rapacious and repressive. They monopolize the country's economic resources, exploit the working people, extract political and economic power from government resources, and utilize the entire might of the reactionary state against the masses who are demanding social change. They are also extremely subservient to foreign monopoly corporations and US imperialism. They hand over the country's patrimony and sovereignty to foreign profit, and legitimize US imperialist domination.

The overwhelming majority of the Filipino people suffer from the chronic problems of imperialism, feudalism and bureaucrat capitalism. Under these conditions, the people have no other choice than to engage in a revolutionary struggle for national independence and genuine democracy. This involves the forcible overthrow of the US-controlled reactionary state, free distribution of agricultural lands to poor peasants and farmworkers, socialist development of agriculture, national industrialization, and establishment of the people's democratic republic to be led by the working class.


The national democratic revolution is currently being led by the Communist Party of the Philippines. Since its re-establishment in 1968, the Party has formed and commands the New People's Army as its main weapon in dismantling the armed strength of the reactionary state. Utilizing the strategy of protracted people's war, the revolutionary forces build up strength in the vast countryside, defeat the reactionary armed forces piece by piece, and aim to seize national political power.


The NPA is also the Party's main machinery for arousing, organizing and mobilizing the rural population for the revolution. Sectoral organizations of the peasantry, women, youth, children and the rural petty bourgeoisie are established. Programs and campaigns for agrarian revolution are launched, including those for lowering the land rent, wiping out usury, improving agricultural production, increasing farm wages, increasing prices for agricultural products, and improving cooperative activities.


Local organs of political power are set up starting from the village level and later up to the municipal and provincial levels. These implement programs for agrarian reform, economic production, health, education, self-defense, local arbitration, and cultural activities.


The revolutionary struggles in the towns and cities are also important. Organizations of the industrial workers, urban poor, women, youth and students, and urban professionals are formed. They launch legal and unarmed mass actions to propagate the demands of the masses for national and social liberation. They also spread the news about the armed struggle being waged primarily in the countryside, inspiring the urban population to support and actively join it.


At the moment, the revolutionary forces led by the CPP are active in 70 out of the total 81 provinces in the Philippines. The NPA is operating in more than 110 guerilla fronts, each front equivalent to a platoon up to a company of Red fighters. The number of full-time Red fighters with high-powered rifles is moving towards the level of 10,000. They are also augmented by tens of thousands of volunteers in the people's militia and in the hundreds of thousands of self-defense units of the mass organizations in the countryside.


The mass base of the revolution runs into millions of people. It has been realized by building the village-based mass organizations, the organs of political power, and the local Party branches. The CPP membership is now beyond 100,000 and is expanding towards the goal of 250,000 in both urban and rural areas. The NPA seeks to increase its Red fighters to 25,000 and its guerilla fronts to 180. The organs of political power and the mass organizations are strengthening themselves and seek to cover more people by the millions through direct organizing and by united front work.


Under the leadership of the CPP, the NPA and other allied organizations of the NDFP are determined and prepared to advance the revolutionary struggle towards total victory against US imperialism and its local reactionary allies. The victory of the Filipino people shall contribute in weakening US imperialist domination and heighten the contradiction among the imperialist states.

We extend our revolutionary solidarity with the people of Ireland in their continuing struggle against UK imperialism and for socialist revolution. We look forward to greater unity between our peoples and mutual support in our common struggle for national liberation, social justice, genuine democracy and socialist development.

Victory to the national democratic revolution in the Philippines!

Victory to the Irish Republican Movement!