Wales: The Spirit of Hirwaun Common : Statement by the Great Unrest Group for a Welsh Socialist Republican Party 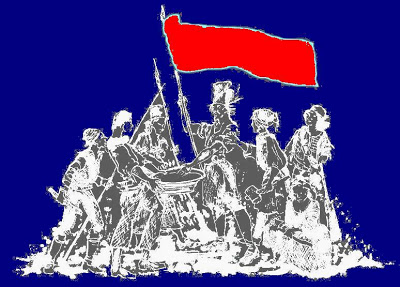 The Spirit of Hirwaun Common : Statement by the Great Unrest Group for a Welsh Socialist Republican Party


The Great Unrest Group for a Welsh Socialist Republican party celebrates the Merthyr Uprising in 1831 a defining point in Welsh History when the Welsh Working Class in open rebellion announced itself on the world stage.

The raising of the Red Flag on Hirwaun Common was a symbolic act of national and class defiance from the new Welsh Working Class.

The Red Flag was the gift of the Welsh Working Class to the workers of the World just has workers in the USA and in particular Chicago gave the world's workers day May Day.

Gifts of working class struggle are the most precious and the new generation needs to learn to honour them.

We at the Great Unrest Group for a Welsh Socialist Republican Party seek the renewal of the spirit of Hirwaun Common in Wales in our ceremonial renewal of the raising of the Red Flag in the 21st century on June 1st 2013.


We have messages of Solidarity from England, Brittany and Occitania and Galicia and Italy, Iceland and Norway and the Philippines for our ceremony on Hirwaun Common.


Our ceremony is not only national but international like the class we represent, we reject supra national bourgeois cosmopolitanism, the ideology of global capitalism for proletarian internationalism the true friendship of peoples based on mutual respect for each others struggles for national and social liberation.

Let the message from Merthyr in 1831 ring our across Wales and the World, We have a Wales to win - we have a World to win.


Hold the Red Flag high beyond the reach of our enemies and false friends, the battle for the 21st Century is just opening and by rectifying our past mistakes we will speed capitalism's demise - socialism is the future, its day is dawning has the 21st century progresses.
Posted by nickglais on 6/01/2013 11:30:00 AM