Kemalism and Fascism - The Revolutionary Thoughts of Ibrahim Kaypakkaya 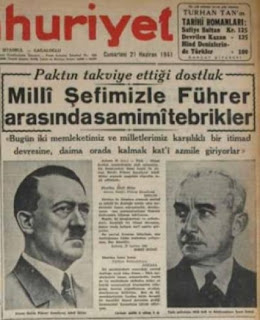 Before the republic of Turkey was formed the Ottoman empire financed itself by plundering territory already under its control and also by raiding adjacent lands. While other countries were beginning to develop modern bourgeois industrial economies, the Industrial Revolution had not reached the Ottoman empire by the end of the 19th century; this was a crucial factor in its collapse.

This crisis accelerated towards the end of the 19th century, aggravated by the actions of France and Britain, who set up their own financial offices in Turkey in order to collect their foreign debts at the source. The economy at this time was in the hands of a class which consisted of a few non-Muslim Ottoman citizens who collaborated with foreign imperialist powers. We call these people the comprador bourgeoisie. At the same time an emergent Turkish-Muslim bourgeoisie, known as the Young Turks, some of whom had been educated in Europe, began moves to seize control of the economy from the compradors and to stave off the economic collapse.

The republic of Turkey was formed on the 29th October 1923. During the First Imperialist War the Ottoman empire was an ally of Germany, and because Germany was defeated, Turkey suffered the same fate. After Turkey's defeat she was immediately occupied by the British, French and Italian imperialist forces. The occupation incited hatred in the masses, causing them to set up anti-occupation resistance groups.

As a result of Turkeys defeat in the First Imperialist War the Turkish-Muslim comprador bourgeoisie lost control to the imperialist occupiers. In an attempt to regain power they formulated slogans aimed at gaining the support of all groups and classes of Turkish society, including the Kurds. It was this group behind the anti-occupation uprising known as the "war of liberation," between 1919 and 1923.

Although Turkey won this "war of liberation," its economy was still dependent upon imperialist forces because the comprador bourgeoisie was the ruling class. Even as the "independence movement" was growing in strength, the Turkish comprador bourgeoisie was double-dealing, and entered into negotiations with the occupying forces. Before the "war of liberation," Turkey was a colonial country. After the war it became a semi- feudal and semi-colonial country.

Both sides were then influenced by events in Turkey's northern neighbour, Russia, namely the 1917 Great October Revolution: the Turkish comprador bourgeoisie's political and economic interests were threatened, as were the interests of the occupying forces. It was perceived as beneficial by both sides to reach an agreement as soon as possible, and this resulted in the Treaty of Sevres signed in 1920 and the Treaty of Lausanne in 1923.

After Lausanne, although the occupying forces were withdrawn or rendered inactive, their economic and political interests remained, in fact, protected as they had been before under Ottoman rule. In order to gain power the Turkish comprador bourgeoisie under the leader, Mustafa Kemal "Ataturk," had promised national rights to the Kurds. He had agreed to recognise civil liberties for all the people and to redistribute land to the smallholder and landless peasants.

However, when the Kemalists came to power, in order to protect their alliance with the imperialists they began reactionary and barbaric methods to control the people. Using the Italian fascist penal code as a model the newly - made Turkish constitution of 1924 was effectively drawn up so that even the most basic of human rights was withdrawn. Freedom of speech and the freedom of the press were suppressed. It became illegal to hold meetings or to go on strike. Indeed any criticism of the state, whether written or verbal, in the press or through the arts, was forbidden.

The state had needed the support of the Kurds during the "war of liberation," hence its promises to the Kurds of national rights. But the Kurds' support was expendable to the Kemalists after they had gained power, as the 1925 massacre of the Kurds during the Shikh Said uprising very clearly illustrated. The second uprising lasted from 1927 to 1939, and the third, known as the Dersim Uprising (between 1936 - 39) left thousands of Kurds dead. 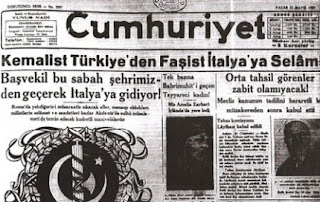 Turkish people are indoctrinated with Kemalist ideas from an early age. The intention is to mesmerise people into thinking that if they love Mustafa Kemal they will go to heaven, and if they don't, they will go to hell. Kemalism is represented as being the only valid path to follow. Everyone accuses each other of not being a true Kemalist and in inter-party political struggles this is a reason often given in order to denounce someone.

If we examine Mustafa Kemal and the deeds of his followers, it is easy do discern the true character of Kemalism.

Firstly, Kemalism is opposed to all progressive forces. During the countrys years of occupation before 1923, the Kemalists established a good relationship with the Soviet Union, receiving moral, financial and military support from them.

This resulted in the occupying imperialists' being forced into concessions in the "war of liberation." As soon as agreement was reached with the occupying forces, the Kemalists took action against all progressives, democrats, revolutionaries and communists.

Secondly, Kemalism is fascist. The Kemalists did not hesitate in massacring, imprisoning, exiling and hanging these workers, peasants and people who tried to claim their basic rights, such as the right to work, education, distribution of the land and personal freedom. Another example of the Kemalists' double-dealing was their treatment of the Communist Party of Turkey (CPT). The leader, Mustafa Suphi was in the Soviet Union together with 14 Central Committee members. They formed the CPT on the 10th September 1920 in Baku. The following year, Mustafa Kemal called them back to Turkey with the invitation to join forces and "liberate" the new country together. On their return journey, whilst crossing the Black Sea, they were assassinated by the Kemalists.

Kemalism also embodies extreme nationalism and racism; racism is particularly directed at the Kurdish nation, as well as at other minorities. The Kemalists had promised independence and liberty to the Kurdish people during the years of occupation in order to gain their support during the "war of liberation." After the war when they asked for their promised demands the answer they received was a most definite no, and there followed the massacres in which tens of thousands of Kurdish people were killed.

Kemalism played an active role collaborating with the imperialist powers, who were involved in the suppression of anti-fascist and anti-imperialist elements amongst the peoples of the Middle East and elsewhere. Under Kemalist rule, Turkey continued to be exploited by imperialist powers, especially by the USA.

Even after the death of Mustafa Kemal and his colleagues, Kemalist ideology continued to permeate the ideas of people of all political persuasions and indeed it was not until the 1970s that anybody was able to analyze its reactionary and fascist character and to struggle against it.

The pioneer of this thinking was the Communist Party of Turkey / Marxist Leninist (TKP/ML) leader, Ibrahim Kaypakkaya, who spoke out amidst cries of derision and shock from the other left-wing parties.

Here are TKP/ML analyses on Kemalism and Kemalist "revolution":

1) The Kemalist "revolution" was a revolution of the top stratum of the Turkish merchant bourgeoisie, landlords, usurers and a few industrialists. Both the comprador Turkish bourgeoisie, and the middle bourgeoisie of national character took part in the revolution.

2) The leaders of the "revolution," starting during the years of the "war of liberation," set out to collaborate with Allied imperialism in an underhand way. The imperialists took a benevolent stand towards the Kemalists and looked favourably at the possibility of a Kemalist power.

3) This collaboration became even stronger and continued after the Kemalists signed a peace treaty with the imperialists. The Kemalist movement developed "against the peasants and workers, and against the very possibility of an agrarian revolution."

5) In the social field, the new Turkish bourgeoisie which developed from within the middle bourgeoisie of national character and which set out to collaborate with imperialism, plus a section of the old Turkish comprador big bourgeoisie and plus the new bureaucracy took the place of the comprador big bourgeoisie of the national minorities, plus the old bureaucracy and plus the Ottoman intelligentsia. The domination of some of the old landlords, big landowners, usurers and speculating merchants continued, while the rest of them were replaced by new ones. Kemalist power as a whole, does not represent the interests of the middle bourgeoisie of national character but interests of the above classes and strata.

What was the position of the left-wing and progressive movements until the 1970s ? All parties and groups, including left-wing ones, regarded Mustafa Kemal, Kemalism as a positive force in Turkish society. Until this date the followers of the Communist Party of Turkey and other left-wing groups had been unable to set up a proper programme against either Kemalism or the political auhority of the fascist state. Instead of taking independent revolutionary steps, they had always been affiliated to one of the main parties in the system: Republican Peoples Party and the Justice Party. However, between 1965 and the early 1970s, the class struggle was intensifying and a revolutionary situation was developing, echoing the Great Proletarian Cultural Revolution in China and student movements in Europe.

The masses and especially the youth were struggling more and more openly against the injustices in Turkey and against the domination of Turkey by imperialist powers. Revolutionary struggle and radicalism against fascism, imperialism and revisionism attracted the masses. From this mass movement some radical petty-bourgeois organisations and parties emerged.

For instance the THKP-C (liberation peoples party of Turkey - Front) and THKO (liberation peoples army of Turkey). Even though the ideology of these organisations contradicted Kemalism in many practical, political and theoretical aspects, they still believed themselves to be Kemalist and followers of Kemalism.

A startling illustration of this was the shouts from the scaffold of "long live Kemalism" by members of these parties who were executed by the Kemalists following the military coup of 1971.

The revolutionary cadres in the 1970s did not understand Kemalist ideology and the structure of state, which was shaped by Kemalist ideology, as they had analyzed and they were adherents of Kemalism.

Source: Thanks to MIM for this contribution