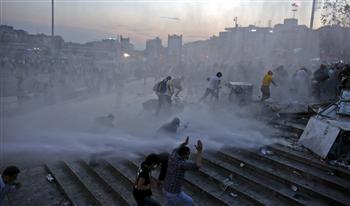 Just days after protesters and the government of Prime Minister Recep Tayyip Erdogan appeared to reach an agreement to halt a planned mall-development project in Gezi Park and Taksim Square, the last remaining green space in central Istanbul, police cleared the park by force Thursday evening.

The move — the latest reversal in approach by an administration that’s seemed unable to hold a course of action in response to the now 17-day-old protests — came after Erdogan, addressing a crowd of about 10,000 supporters at a rally in Ankara

Watch live streaming video from revoltistanbul at livestream.com
Posted by nickglais on 6/15/2013 12:58:00 PM